Test Your Charging and Electrical System

A lead-acid battery has certain defined characteristics than make it easy to evaluate the health of the charging system without fancy test gear. An in-car test is actually better than taking parts off. I hope this helps people avoid wasting money on parts. Here's how we can check a charging system with a few simple pieces of equipment. Basically, you just need a test light and small test meter.

Contrary to myths and what marketing departments and salesmen would have us believe, using an under drive pulley system does not free up horsepower when racing. It actually can do the opposite! It frees up horsepower at idle, but it loads the system heavier when you rev up the engine as the alternator tries to catch up on missing battery charge!

When alternator shaft speed is reduced, the voltage regulator turns up the field current. The regulator, as long as the shaft is spinning fast enough, increases field current and pulley torque demand until the alternator is back drawing exactly the same engine horsepower power it would have consumed turning at normal speeds! As a matter of fact, since efficiency often drops with reduced rotor speeds, the alternator sometimes draws more engine horsepower and run hotter with an underdrive pulley system than with standard shaft speeds!

The only way to reliably and significantly reduce alternator drag is to turn the alternator off while racing, although turning lights and electrical accessories off during racing certainly helps. Remember that when the vehicle is running the alternator tries to supply all the load energy. At reasonable to maximum engine speeds, typically from 1500 RPM to redline with heavy loads, and from idle all the way to red line with light electrical accessory loads, the battery just goes along for the ride. It really doesn't do anything, except wait for the alternator to fall below operating speeds.  A battery will consume noticeable engine power only when the battery is low on charge and the missing charge is being replenished. A battery, when charged, is really just an electrical storage tank.

NEVER pull the battery cable to check the alternator. This very crude test method was marginally OK when we had vacuum tube car radios and point-type ignitions, but it is a very bad idea now. The battery stabilizes the electrical system and loads the alternator, preventing high peak voltages or voltage surges as the alternator adjusts magnetic flux to produce the same average voltage at different current demands. If you rev the engine up and pull a battery cable, the alternator voltage can spike up to 100 volts or higher before the alternator flux dies off enough to bring voltage back down to 14 volts or so. This can kill the car's computer and other expensive electrical components. I've seen headlights blow out when a guy opened a battery switch while an engine was revved up. If you hear anyone telling someone this is a way to check an alternator in a modern vehicle, stop them!

TESTING the ALTERNATOR, is it good or bad?

To charge the battery, the alternator voltage output has to exceed a minimum charging voltage. This minimum charging voltage is 13.8 volts dc across the battery terminals, or at the output of the alternator. A single lead-acid cell starts to charge at anything over 2.25 volts. Since a 12 volt battery has six cells, any 12 volt lead-acid battery needs at least 13.8 volts to start to charge. This voltage will be enough to fully charge or maintain the battery on a trickle charge, but charging time will be very long at 13.8 volts.

To fully charge in reasonable times, alternator output  must be 14.2 V to 14.5 V as measured right across the battery posts. Above 14.5 volts charging voltage, batteries have a greatly increased tendency to release excessive acidic vapors, hydrogen gas, and to corrode things around the battery. The battery terminal charging voltage must be less than 14.7 volts to prevent excessive gassing. Charging voltages over 14.7 volts can prematurely dry the battery by boiling out electrolyte, and increase risk of a battery hydrogen gas explosion. 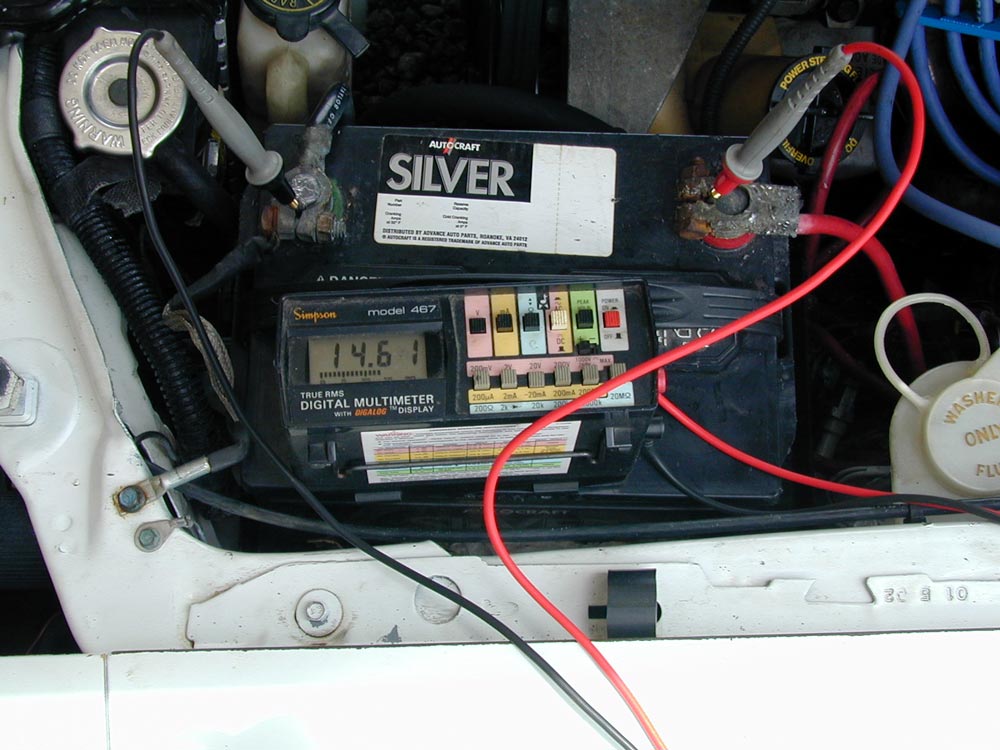 In this case the battery charging voltage is 14.61 volts with the engine at high idle. 14.4 volts is the gassing threshold. The battery above will slightly gas, but not enough to be harmful, and the battery will get a quick full charge recovery after starting. 14.8 would start to be a worry (there might be liquid or corrosion on the battery) and 15 volts would be a real concern, but 14.6 is fine. Less than 14.3 would be a "weak" alternator or regulator. Much less than 14.2 at a fast idle is bad wiring, bad alternator or regulator, or a bad connection or fuse link. When running at a normal slow cruising engine RPM, the voltage across the battery terminals should stay over 14.3 volts even with full load, like lights, heater blower, and everything else, running. If this system was in a restored 1966 GT coupe, I would probably change the regulator to reduce maximum alternator voltage. This would prevent deterioration of metal around the battery from excessive charging vapors. It's OK in my daily driver as long as I watch the battery for purged acid deposits.

Turn the motor off with no load (headlights, etc. all OFF) and read the battery voltage. 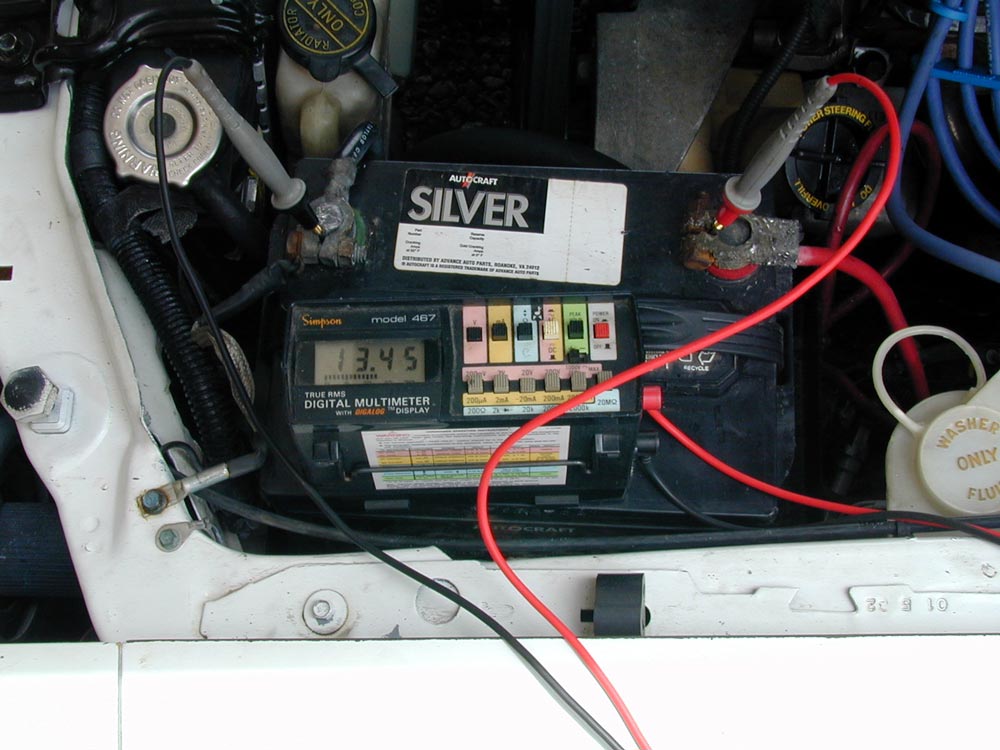 With the engine just shut off, the battery voltage should be 13.2 volts to 13.8 volts. The exact voltage varies with the battery, how quickly you read it, and the state of battery charge. This voltage is not too important because the battery will slowly and steadily settle to a new voltage that indicates the true state of battery charge, but the voltage measured right at engine shutoff is a very clear indicator if the alternator or charging system is charging. If the voltage is over 13.2, the battery was just being charged.

So what happens if your battery goes dead all the time, but the alternator seems good?

To test the electrical system for unwanted loads draining power, shut everything in the car off. Do just like you would do things when parking the car overnight. make sure all the lights and accessories are off.

Remove the negative post wire and check current draw with all electrical loads off using a test light. (I made a test light from an old tail lamp bulb.) 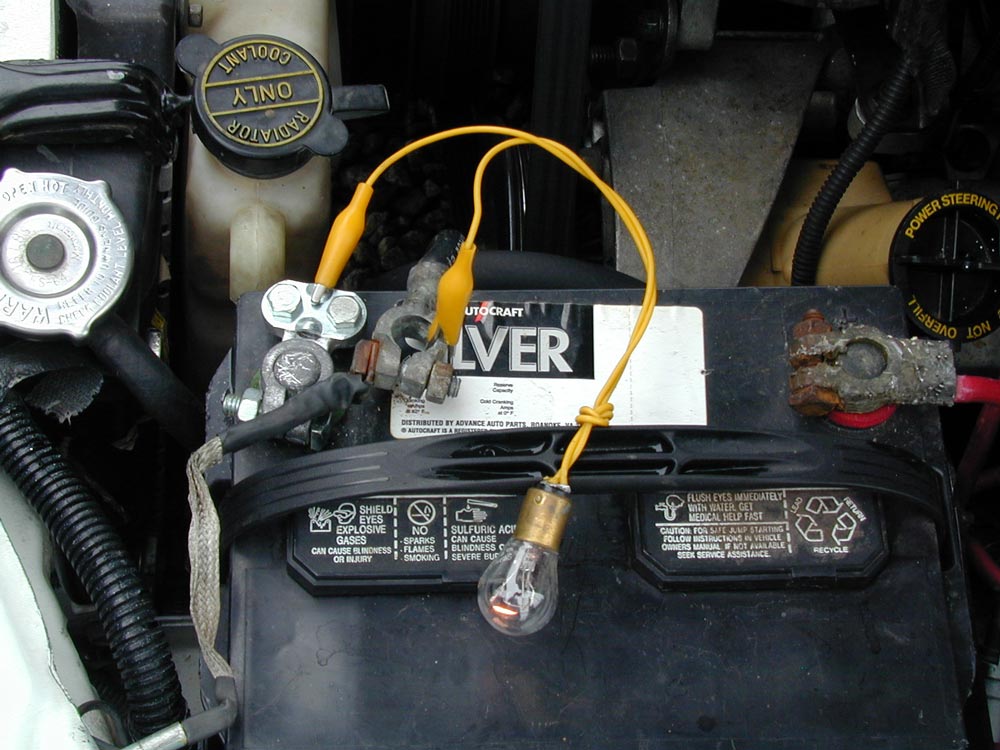 The dull glow in the light filament indicates a current drain problem. At this point I do not want to connect a current meter to check leakage because the short could damage the test meter! If a small clear test lamp like this does not light, then it is generally safe to directly measure current drain with a test meter. 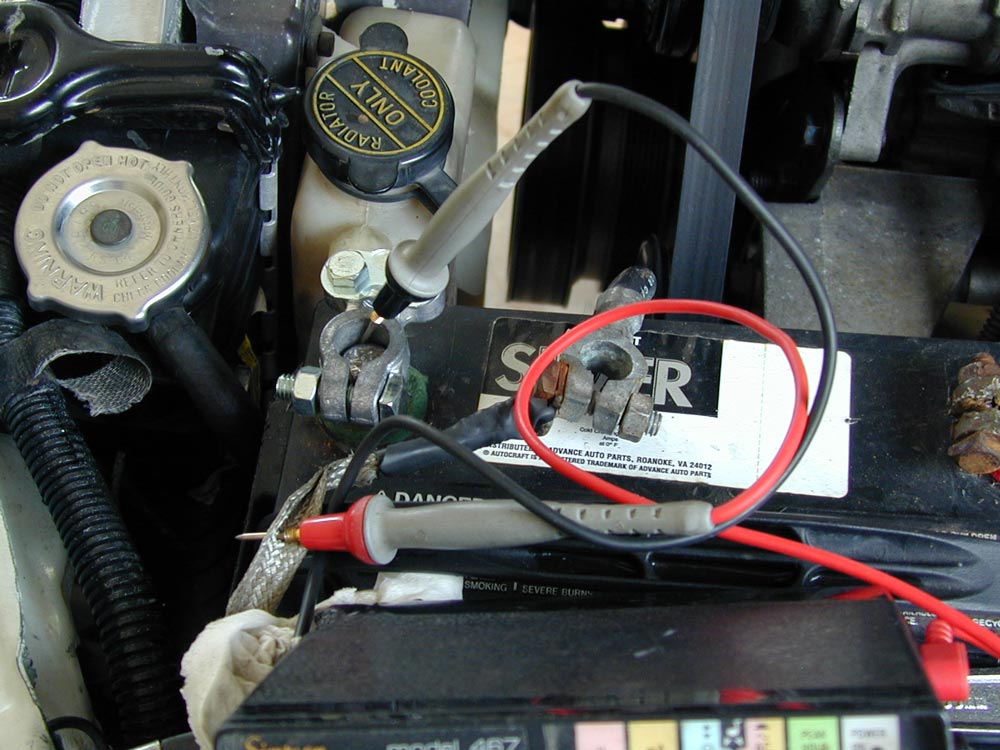 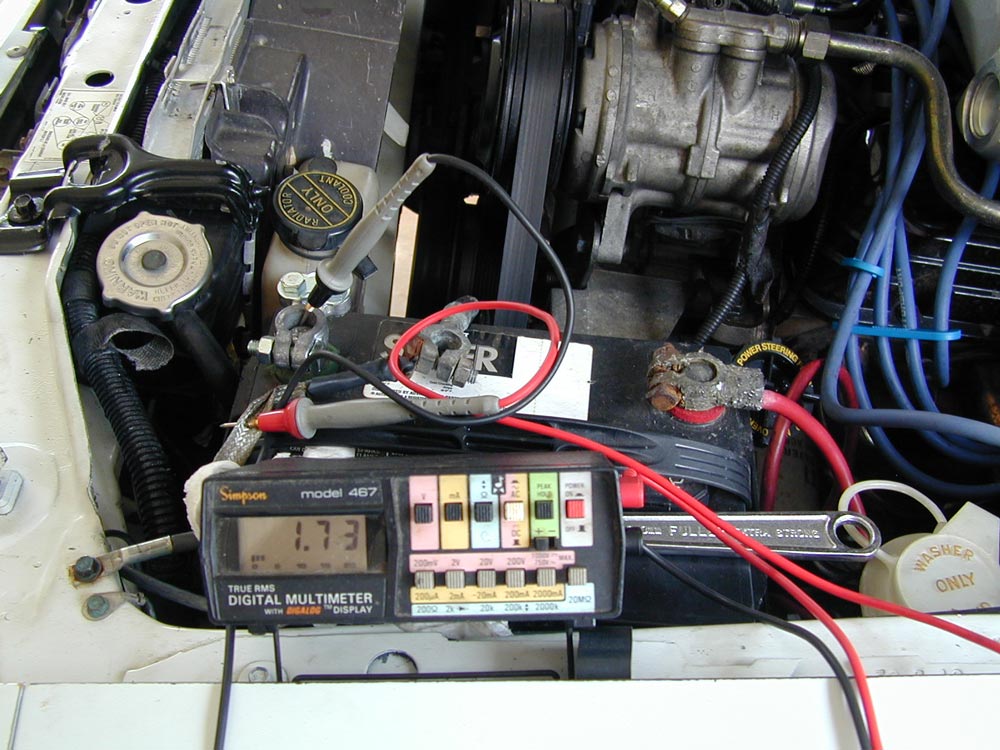 This is measured on the 20mA scale. The mA scale reads in thousandths of an ampere. My 1989 Mustang LX, after I changed a bad alternator diode, now has about 1.73 mA of battery drain. This drain is all from the EEC-IV computer memory. Different radios and different computers might have different standby drains, as might  accessories like clocks, but in no case should "overnight off" leakage exceed 25 mA or so. 100 mA is like leaving a small interior dome light on!

My Kenwood stereo draws 1.5 mA when connected. If you have a digital clock that stays on, an alarm, or some other load this current will be higher. At 75 mA, leakage could compromise battery life of infrequently driven vehicles. mA is milliamperes, or one 1000th's of an ampere. 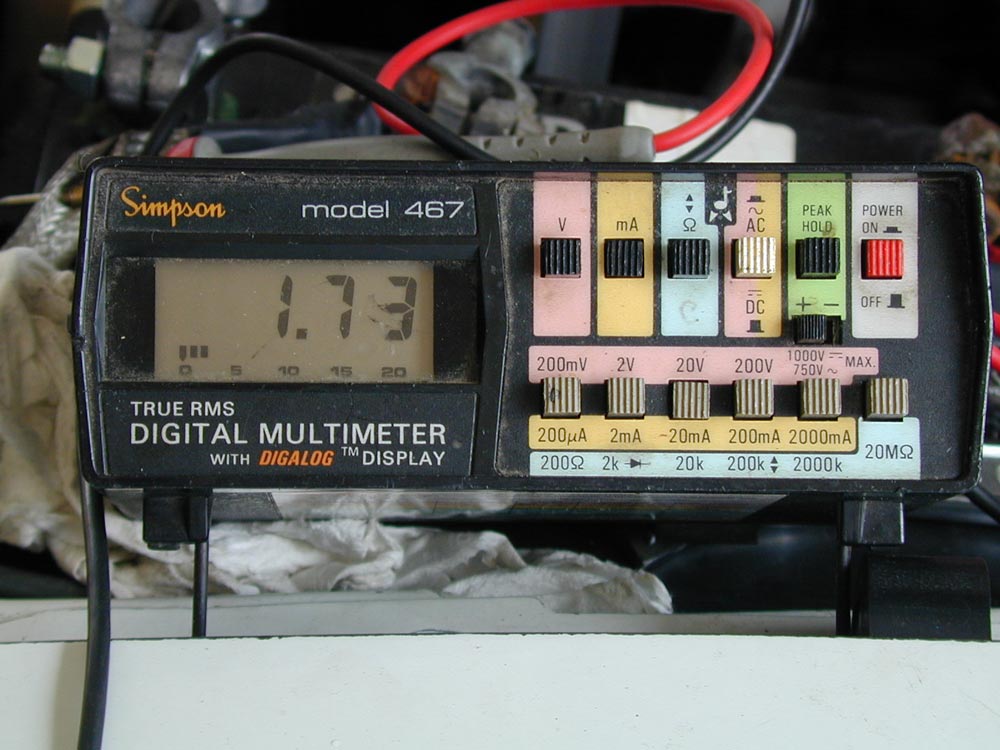 The meter above is on the 20 mA scale, and is reading 1.73 mA. That is nothing. The battery charge would probably last for months of sitting.

Connect the test light in series with the negative post, and start pulling feed wires. The first to check is the heavy charging wire from the alternator.  A bad or leaky diode in an alternator is a very common source of overnight battery drain. 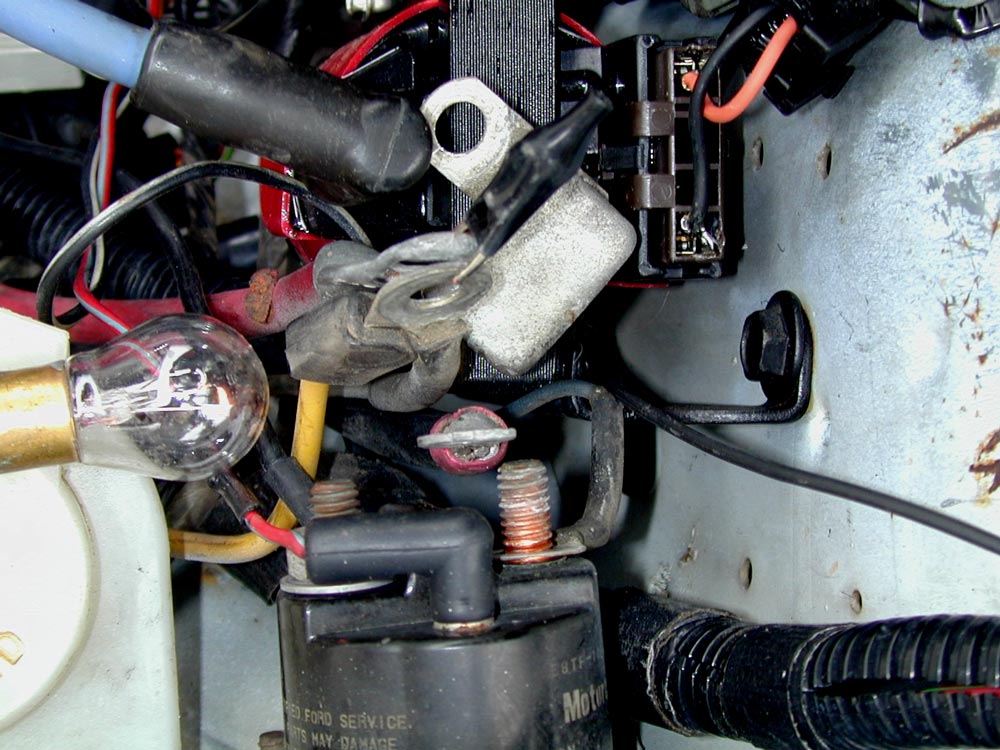 Connect wires one at a time to see what lead is drawing current. In my case it was the alternator lead! Even though the alternator was charging fine, it was also draining the battery. My problem was a bad alternator diode. There could be a variety of other problems, like a bad voltage regulator or a stuck relay contact.

I downloaded this from T. Moss's website, which I find much more useful than other sources. Tom Moss goes out of his way to help people, and is a genuinely nice fellow. AutoZone and others have some free schematics up also. 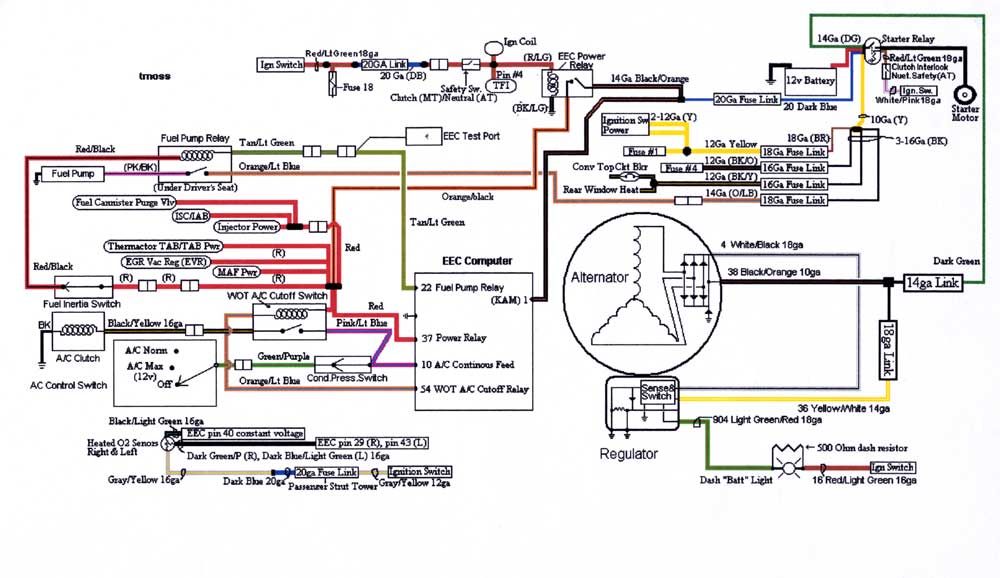 T.Moss's diagram (linked above) showed me the heavy dark green wire from my starter relay causing my "drain problem" went directly to my car's alternator output.  In my case one of the diodes (the little black "arrows") in my car's alternator was bad. This current loss also made my alternator slightly warm to the touch, even when sitting off for several hours.

Battery voltage can be higher than 12.6 volts immediately after charging.

Any open terminal voltage below 12 volts is considered full discharge or a dead battery.

Starters sometimes can test good out of the car, but can be bad. One common problem with cheaply built or defective starters is starting torque loss when hot. This usually happens because the iron loses ability to hold magnetic flux (starter current skyrockets when hot), or because the wire is undersized and goes up in resistance (starter current drops when hot), or the starter seizes up (also causing high current).

The best way to test a starter is by measuring voltage and current.

To test a starter and wiring with a simple meter:

Make sure the battery is good. There is a voltage table above for battery charge. The no load (everything off) battery post voltage should be at least 12.6 volts and as high as 13.8 volts.

If the starter cranking voltage goes below 9-10 volts, you have a problem with starter current, engine grounding, or battery.

Measure across the battery by probing directly into the battery posts (NOT the terminals that clamp to the posts, but poke directly into the lead posts coming out of the battery), and see how much the battery drops when cranking. If it drops and you are sure the alternator is working, take the battery to an automotive parts store that tests batteries. Unlike starters, testing batteries is VERY easy and very reliable.

Cheap or poorly manufactured starters show up mostly when the starter is very hot. Starters very often cannot be tested accurately on a bench, because they often can fail only when very hot. I see very few tractors, cars, and trucks that crank OK when cold and do not crank when hot that have problems other than a starter! My diesel tractor was a bitch to start when hot, but cranked like a dream when cold, and it was the starter. My tractor does not have headers, either. Just the block heat was enough to make the starter quit. I've had the same experience with cars. When cold, the starters work and test good! Marginal starters can have enough oomph to start properly when the system is cold, but fail when hot.

Bad alternators or batteries show up mostly when the car is very cold, but both alternators and batteries can be tested reliably to see if they are good.

Installing a larger alternator will not fix a bad starter, bad battery, or bad wiring.