The G5RV antenna is probably one of the most maligned antennas in the world. I'm not quite sure how it got its reputation, but if there was ever a national association for fair treatment of antennas the G5RV would be the poster child! Part of this is because people install G5RV's in very sloppy installations and then assume all G5RV's will perform like their badly installed antenna. Another part of the problem is people repeat inaccurate claims or repeat folklore.

The 102 foot long "G5RV" was not actually invented by G5RV. The 102' flattop appears in books as far back as the 30's as an all band antenna.  G5RV published changes to the basic 102' 80/20M antenna to optimize it for coaxial feed on 20 Meters.  Over time, changes have been made to "tweak" operation as a multiband antenna.

The earliest reference in my books is in a 1937 Handbook. This configuration was optimized to match a 625 ohm line: 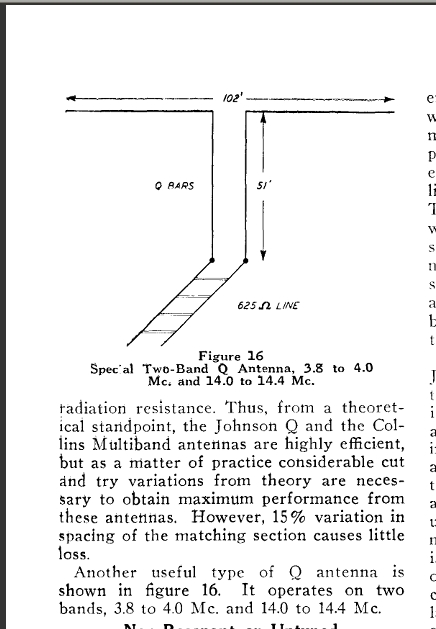 So why 102' length? The 100 - 105 feet long doublet length reduces large impedance excursions present in half wave 80 meter doublets when used on harmonics. For example, a half wave center fed doublet or dipole appears as 40-100 ohms on the band where it is 1/2 wave long. If we connect it to a 1/4 wave long 400 ohm 1/4 wave feedline, the feedline SWR is between 4:1 and 10:1. This means the impedance at the transmitter end is somewhere between 1600 and 4000 ohms! On 40 meters the antenna becomes a full wave. It is two half waves fed in series, the impedances of each end fed half wave adding at the feedpoint. The feed impedance becomes several thousand ohms. Making the antenna 102ft long moderates that impedance, especially if the balanced feeder is shortened to about 30-35 feet.

The balanced line in systems like this acts as a non-radiating matching transformer. The balanced line does not significantly "radiate". The balanced line acts like a distributed matching network, loosely correcting impedance errors on several bands. (You'll see more of that down page.) A few bands are not corrected, actually being made worse. On most bands the G5RV works fairly well when mixed with a 50 ohm feeder. The G5RV has a modest SWR in the 80, 40, 20, and 12 meter bands, is  usable on 15 meters. It is not a good choice for 30 or 10 meters. On 30 and 10 meters, feedline loss from high standing wave is a worry.

The ZS6BKW is another iteration that makes different bands better, but again does not correct all bands.

Some people believe an antenna not being a resonant length hurts radiation. That isn't the case at all.  The system from source to load generally must be reasonably well matched matched for maximum energy transfer, but non-resonance in an antenna itself does not hurt reception or transmission. Lack of matching reduces energy transfer, but only dissipation from increased current in loss resistances wastes power or hurts efficiency.

Most important to remember, all antennas are compromises in cost, performance, complexity, and size. A properly built and installed G5RV is a better option than an end fed half wave so long as the central feedpoint can be tolerated.

I installed my first G5RV antenna in the mid-90's. It was about 102 feet long. It was fed with 30-feet of 300-ohm transmitting type ladder line. I had a choke balun made of 20-30 feet of RG8X wound on a thin wall 4" PVC drain pipe. This choke was at the transition between the twinlead and coax. My antenna was installed about 80-100 feet above ground between two tall Pine trees.

No, the 300 ohm (or less ideal 450 ohm) does not radiate (except when fed as a T for 160M).  The G5RV, fed the normal way, is a simple doublet antenna and the 300 ohm section is just a non-radiating matching section. The idea the matching section radiates a vertical signal is just some silly Internet myth.

To work 160, I built a small box that contained a small vacuum relay. With the relay engaged the antenna is worked against ground. This made it a 100-foot tall "T" antenna that I worked against a radial system. My final system looked like this:

It isn't necessary to have 100 feet of height. Even heights as low as 30-feet will work, but C1 might have to be changed to an inductor, L network, or some other simple antenna matching system. The 160-meter matching system must not create a path to ground when in the HF position. In my system, I really didn't care if the feeder radiated a little or not. The antenna was a safe distance from the house and any noise sources. 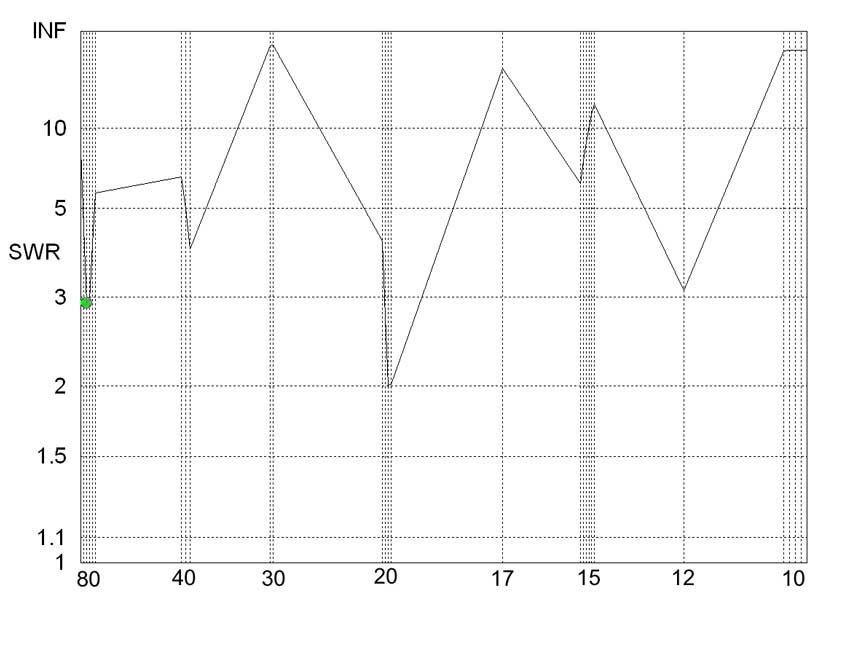 While the G5RV requires an antenna tuner, it is very efficient on at least 5 bands. This is true even when fed through fairly long runs of RG-213 feed line.

There is a myth that the G5RV works better with a 75 ohm feed line. This myth stems from the fact Varney, G5RV, originally used 70 ohm twinlead to feed the antenna.

Here are the impedances of the G5RV at resonance near each band where it has a reasonable SWR. This is with no feed line loss, measured right at the twinlead end where coax would connect:

You can see the antenna slightly misses resonance on several bands, but not so far that SWR is intolerable. Either 50 or 75 ohm feed line would work, either being about equal with the other.

You should use good quality coax on the G5RV, and a good antenna tuner.

There isn't any reason to run a certain length 50 ohm feeder (it can be 75 ohms also, if good quality). The shorter and better the feed line, the better the antenna will work.

Assuming a 100-foot long LMR-400 feed line we have the following mid-band feed line losses when a G5RV is compared to the same transmission line with a perfectly matched antenna:

We can see on 80, 40, 20, and 12 meters the antenna above has very good efficiency. Efficiency be essentially just as good as a dipole. On 15 meters performance is still good. The antenna is poor on 30 and 10 meters.

On The Air Testing

One of the only ways to reliably test an HF antenna is a blind A-B comparison against another known good reference antenna. Since I also had a dipole at 100 feet a few hundred feet away from the G5RV (similar height), I had an ideal testing situation.

I checked into various groups on 75 meters and did a blind A B antenna test. I would say "this is antenna one one one, this is antenna two two two" while switching antennas. The results were:

Based on models and air testing the G5RV performs quite well as a 5-band antenna. Those bands include 80, 40, 20, 15, and 12 meters. The antenna will NOT work as well as a dipole on any other HF band.

By adding a relay and a ground system the G5RV can be made to work quite well as a "T" antenna on 160 meters.

People have an overwhelming prejudice against the G5RV. This prejudice even biases signal reports when they think a G5RV is being used. Like any antenna, the G5RV will work best when up in the clear. Run it through the bushes or like a clothesline and it might be a disappointing antenna, but then so would a dipole or Rhombic at the same crummy height.