A charge pump is also used in older tachometers. As a matter of fact, I built my very first charge pump circuit in the early 1960's when I was 13 years old! I used that charge pump to make a tachometer for my father's 1959 Ford.  This charge pump used new devices called transistors! It required about 30 discreet components.

In the early 1980's, I designed a commercial RPM based ignition shutoff system. This system used a "charge pump". A charge pump puts a small measured amount of charge (current) into a capacitor with every ignition pulse. The charge also pumps out at a steady discharge rate at all times. The more often charge is pumped in, the higher voltage becomes. When the voltage across the storage capacitor reaches a level exceeding an accurate reference voltage, a comparison circuit triggers an output. This circuit trigged a relay that removed electronic distributor signals. The result was the familiar stuttering when a certain RPM limit was reached.

Since charge pump current is set by a charge limit resistor, varying the resistor changes RPM rate to trigger output. A second method of changing RPM is through varying comparison voltage.

Charge pump based tachometers and speed regulars are simple now. A single IC chip does what a few dozen components did before. Here is a "modern" charge pump http://www.ti.com/lit/ds/symlink/lm2907-n.pdf

When you change a "pill" in RPM limiter systems, you are normally just changing a cheap ten-cent resistor. If you read the resistance, you can duplicate the "RPM chip" for pennies!

That claim is actually contrary to how the system works! With modern EEC systems and port injection, automobile manufacturers now have a choice of either removing ignition pulses or stopping fuel injector signal. They can easily do either spark or fuel, but manufacturers overwhelmingly choose fuel cut rather than spark interrupt. Let's look at why they choose fuel cutoff over ignition cutoff, and why Internet sites often convey the wrong answer.

A Ford TFI system uses a flyback or induction coil system. The ignition coil charges the core magnetically during a dwell period, and generates a high voltage spark when the charging current is interrupted. This is the same as old point style systems, except more refined. If we opened the coil, it would interrupt current and create a spark. This might occur when a piston is on the way up, or while a cylinder is filling on the intake stroke. That would be bad news.

To avoid untimed firing, the limiter "shorts" the coil negative to ground. This prevents falsely timed ignition by the RPM limiter.

Here is a shot of a popular "soft" RPM limiter, said to remove spark progressively. 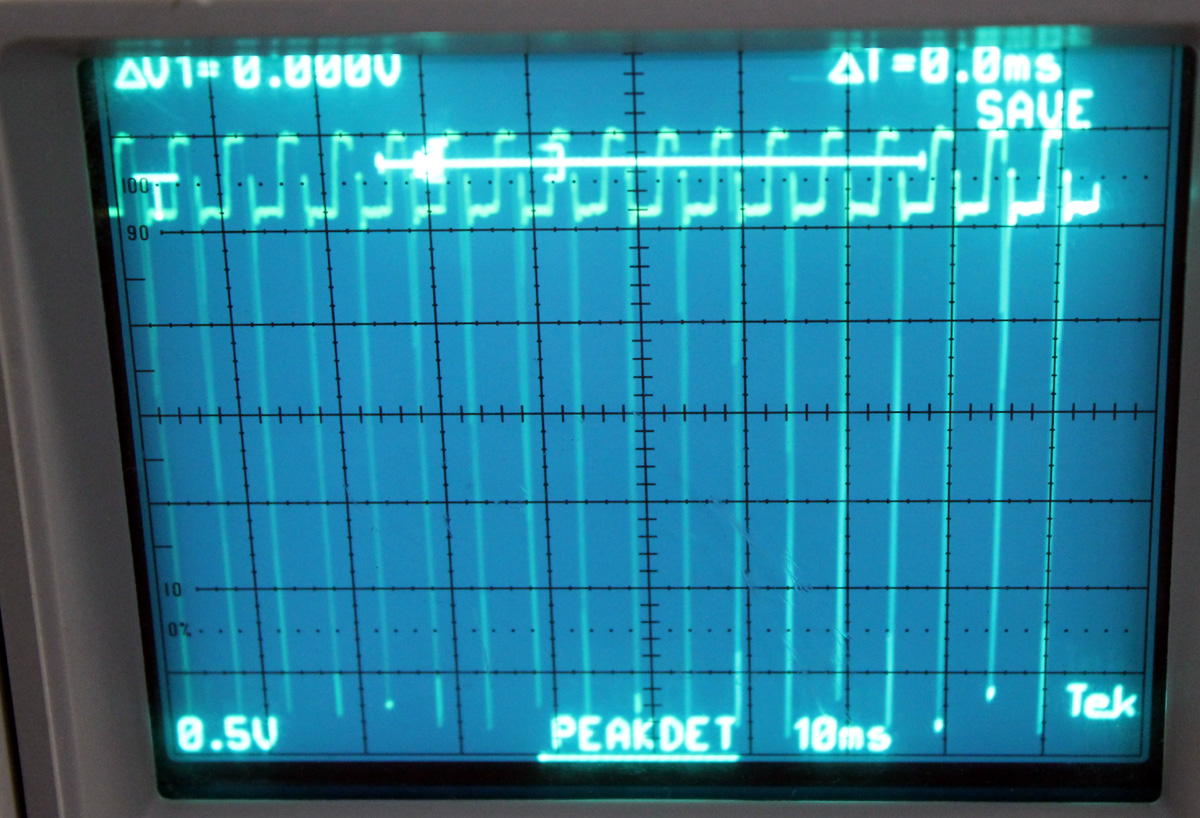 Changing frequency to 2998 RPM, just 1/2 RPM higher, we have this pattern: 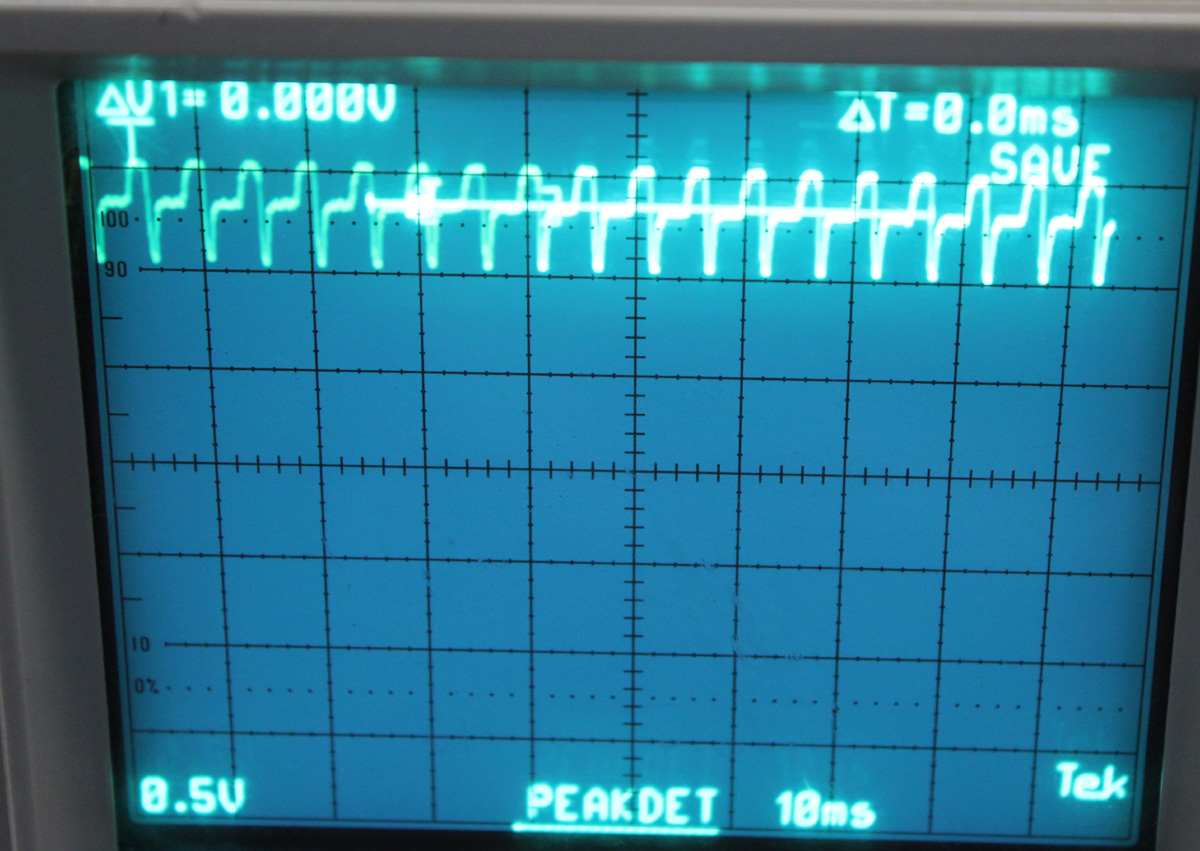 Primary peak voltage is now limited to about 50 volts on release. This limits the ignition pulse to a few hundred volts, which not enough to fire the spark plug. This does two things:

1.) It prevents coil heating or damage in limiting mode by not forcing the coil to hold at full current

2.) It allows a tachometer to still work, and the RPM limiter to read a good sample of engine RPM

3.) It still mutes the spark adequately

Any spark based cut with a fuel cut loads the exhaust with unburned fuel and air. This may or may not be a problem, depending on how fast the RPM limiter restores and how large the "slug" of unburned mixture is held in the exhaust. The typical aftermarket system does not actually "plan" a progressive cut. It has no way of doing that. It is really a complete full cut to all cylinders, with a very fast restore the instant the engine drops below cut speed. It is this loop of engine inertia and fast response that creates the stuttering, and random spark cut. Technically the cut is progressive in off-time, not the particular cylinder cut. It just cuts the entire thing, until the engine drops below cut RPM. The measured response time on my 363 Ford at 4000 RPM was about 10-20 mS, which is about one crankshaft revolution. A heavier flywheel with no braking load on the engine will slow the stutter rate, while a lighter wheel (and rotating assembly) and crankshaft braking will speed the stutter rate.

This works fine if the system expels the air-fuel mixture without ignition of significant unburned air-fuel in the exhaust, and if the unburned fuel has not wet down the plugs or washed down the walls. If fuel-air mixture hits other hot gasses from running cylinders, or is ignited by hot exhaust system parts, the unburned mixture will explode and pop. This is tough on exhaust components, especially including turbocharger impellers and waste gates. It can wet down oxygen sensors, or damage them from heat or soot in the exhaust. If you have baffled mufflers, an explosion can damage the muffler system.

A slower the off-and-on stutter cycle,  hotter and larger volume the exhaust, and more restricted exhaust will increase the intensity of the "pops".  This cannot be corrected by changing mixture or timing!

There are many cases where ignition interrupt works, but skipping ignition while passing full air and fuel can be tough on parts. This is especially true with a poorly planned system like the Holley EFI systems.

Since air-to-fuel  ratios greater than 18:1 fail to support any combustion, shutting off fuel does not lean an engine! The engine simply stops firing the cylinder at the next spark after the fuel injector signal is halted. The cool raw air passes through, absent any fuel, and appears in the exhaust. An O2 sensor reads this portion of the exhaust as pure air, and this pushes the indicated AFR reading higher.

This is not a lean a mixture. The mixture at firing injectors remains at the rate of non-limited mixture. Combustion temperatures do not rise, and the mixture does not detonate. The O2 sensor is simply reading an average value of pure harmless unburned cool air mixed with normal exhaust. It is no different than the O2 error caused by back-pulse entering a header or tailpipe, that also causes a false lean indication.

Early Ford computers have a half-fuel cutoff. This cutoff does not run half fuel, it actually completely cuts the injectors in a pattern that makes half fuel. The injectors being cut do not fire at all, which means those cylinders are dead. None of the cylinders go lean, or starve at half-fuel. This is why half-fuel limit engagement cuts-out just like an ignition cutoff system, absent any exhaust pop or backfire.

When used with a transbrake or clutch to launch, response time has to be extremely fast between cut and no cut. RPM has to be a very narrow on-to-off window, or the system will have unstable hold RPM. The cut, as with spark, should be all cylinders at once. The restoration should be all cylinders at once. If the limiter system has RPM hysteresis, or has slow response time compared to engine inertial hysteresis, it will make a very poor trans brake or clutch launch limiter. The engine will rev and slow repeatedly. This is fuel cut equivalent of the spark-popping problem.

Which System is Better?

This choice is very important!! We have two choices. We can either push unburned fuel and air through the system, we can cut-off fuel, or do both.

As an almost universal rule, removing fuel is safer and easier on components. Removing fuel instantly and fully on any group of cylinders (half fuel systems) or all cylinders (full fuel cutoff systems) prevents heating of components, or fuel explosions in the exhaust. Fuel cutoff also prevents wetting plugs, and prevents diluting oil on cylinder walls with unburned fuel. This is why manufacturers, starting as soon as EEC systems were around, starting using fuel-cutoff RPM limiters. This still continues today, traction controls often use a partial injector time shutoff. This does not mean they shorten injector times (which would lean the mixture), but rather means they abruptly hold some injectors closed to reduce power. If manufacturers shut down ignition pulses for traction control, traction control would be accompanied with blown mufflers or catalytic converters, or perhaps damaged O2 sensors.

The exception to superiority of fuel cutoff control occurs when a system has uncontrolled fuel that is not instantly fully on or off, and sufficient uncontrolled fuel remains to permit combustion. One example is a large amount of nitrous in a "wet system", where nitrous system fuel is sprayed in upstream. Since spray bar or nozzle fuel shutdown takes time for pressure bleed down, or if fuel is such a large quantity that manifold runners are wet enough to support combustion, a wet nitrous system might lean-fire cut-off cylinders. If the wet system is so wet, and the system has such a time lag fuel cannot be rapidly brought too lean to ignite, cylinders might actually become lean.

With nitrous or upstream injection, we should think hard before using any fuel RPM limiting system. With most or all fuel from injectors, especially with injectors located near each cylinder, a fuel removal system is superior in safety.

The ideal system would cut fuel and spark, and have a very fast response time and very narrow RPM window.