Electrical rules require the center conductor and inside of the shield to always carry equal and opposite RF currents. 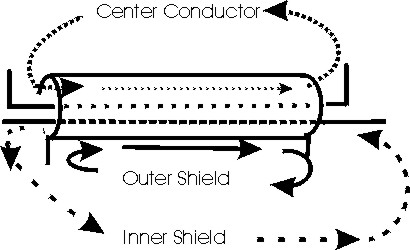 Notice in the drawing above the center and inside of the shield carry equal and opposite direction RF currents. This ALWAYS is the case when the shield is several skin depths thick.  We cannot force anything else to happen!

In the drawing above and below, the outside of the shield is isolated by skin effect. It behaves like a separate transmission outer conductor. Skin effect prevents any current, voltage, or field (even magnetic) from penetrating the shield when the shield is many skin depths thick. Only the breaks at the ends connect the inner and outer shield conduction layers.

The only egress or ingress points for voltage and current are where discontinuity in the shield might occur through an intentional or accidental break in the shield.

Radiation In or Out of Shielded Lines

To operate without radiation, coaxial cables require equal and opposite currents in the shield and the center conductor. The outside of the shield must not have an RF potential difference along it's length. We cannot have voltage gradient (electrical fields) along the length or the outer conductor layer will conduct currents. This generally means both ends of the cable should have zero volts to earth or the environment the cable operates in.

A unique characteristic of RF current is it always moves away from the densest magnetic field. This is the same thing that causes skin effect.

Why then does current flow inside some cables, like transmission lines? Because the center conductor and shield carry opposing currents!

Moving all current to the inner wall and shielding the cable,  always requires opposing flow of exactly equal currents.

Any additional current, beyond the subtraction of center and shield currents, moves to the outside of the shield.

If we feed exactly equal and opposite currents into the coax ends, currents have no choice but to flow INSIDE the cable shield! The outermost conductor can be treated as a single wire, since everything else is "hidden inside". When currents are equal and opposite on the shield and center, "extra" current that flows over the outside of the shield cannot exist. Because of this rule, we do not need to ground the shield to prevent radiation. The trick here is we need to have equal and opposite currents. When the shield has potential difference along the length we can greatly reduce outside currents by making the outside of the coax have a high impedance. We can do this by selecting a proper cable length, by adding sleeves of soft-iron magnetic materials or winding the cable in a coil with or without a core to form a choke. Skin depth prevents the inside of the cable from "seeing" what is done on the outside.

Most interesting in all of this is the claim or idea the "shield" of a shielded loop allows magnetic fields to pass while filtering electric fields. The same rules apply as with coaxial lines. The shield actually becomes the antenna, and it couples to the inside only at shield gaps. If the gaps aren't exactly opposite the grounded part of the loop and inner conductors don't exit exactly at that grounded point, the shield actually  UNbalances the loop!

Coax as a Shielded Ground Lead or Radial 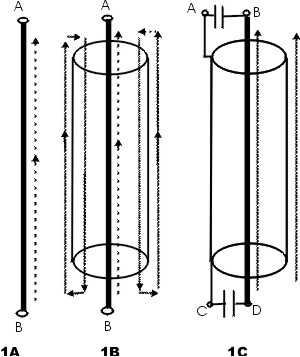 1B shows current when center conductor is insulated and fed with 1 ampere. In this case ALL currents are 1 ampere, but the effective resistance and reactance of  point A to B increases! This line radiates just as well as the line in 1A, but impedance and loss resistance increases slightly.

1C shows current when a so-called "shielded ground" is used. With low reactance capacitors, if A to C conducts radio frequency currents, the current flowing from B to D inside the cable is negligible.

The same is true if B to D is used as the connection. B to D have no current. All RF current is on the cable's outside wall. The RF impedance is essentially the same as the shield alone. The line freely radiates because, once again, one ampere of unopposed current flows over the outside shield wall.

If in 1C the capacitors are removed and the center conductor alone from C to D conducts RF current, the inside of the shield and the inner conductor between B and D will have no RF current. The impedance is the same as the shield alone. The line once again freely radiates.

It is electrically impossible to shield a ground lead. This is because current can only flow inside a coaxial cable when the center and shield carry opposite flowing currents. Same direction currents, like ground currents from the station to ground, can never flow inside any conductor or group of conductors. Common mode currents always flow with most current in the area the greatest distance away from the center.

This same effect also occurs when coax is used as a radial or as an antenna. This is an electrical law that cannot be circumvented or broken. So we again see, despite claims in a few articles about antennas and radials, velocity factor inside the cable does not in the least affect electrical length of the radial or antenna!!

Pointing out how it works may bring forth a response "I added a shield ground and it cured my RFI problems". In fact they never added a shielded ground! They really just altered the ground they had, generally making it much thicker and often a different length. Through sheer accident they changed the ground connection in a way that produced a voltage null in the shack, and attributed the lucky accident to something impossible to do. They changed one thing thinking one thing, and through dumb luck wound up changing something else. Then they used the accident to invent or support an impossible claim.

Everyone already knows, or should know, wider ground leads make better grounds! It isn't the alleged "shielding" that helped. As a matter of fact the capacitors and inside conductor could be dispensed with and not change the system at radio frequencies one bit. What actually corrected the problem was using a thicker ground lead, and maybe changing the length to a more favorable length. Not only that, when the new shielded ground lead was run, most people probably cleaned up all their other messy or poor connections.

Wider area ground leads make lower impedance RF ground. There is no magic, and there is no such thing as a shielded ground.