Bolt baluns, steel wool balun cores, and other solid iron or steel or laminated cores are a HOAX. They are not baluns at all. The text below explains why they are hoaxes.

Eddy currents generate their own opposing magnetic field to the incident field exciting the core. If the iron has large enough cross section eddy currents and the resulting counter MMF from the eddy currents will push the magnetic fields back out of the core. With increasing frequency, a given size iron particle has a frequency where inductance starts to decrease. This effect is from the "shorted turn" generating opposing flux. As frequency increases further, inductance decreases. At some frequency the core is no longer able to support the field, and because of eddy currents, actually reduces inductance.

For example, inserting a solid iron slug inside a small RF coil shows a behavior almost identical to using brass or aluminum slugs. Inserting a solid slug of iron might increases the magnetic field concentration and inductance near direct current frequencies, but at some higher frequency eddy currents and the inability of the core to follow field changes cause the flux concentration to decrease.....eventually reaching zero. At some frequency, the counter MMF takes over. Inductance is actually reduced by the core.

We see this effect when we look at effective permeability of iron RF cores. In the graph below, permeability ("inductance") μ's   is flat until 1MHz. Above 1MHz  μ's decreases. μ's reaches zero someplace above 30 MHz. At that frequency, the core is no longer magnetic. This is because the iron in the core is too large in size, it cannot follow the magnetic field, and it supports eddy currents. A steel bolt would be thousands of times worse, and not even work at audio frequencies. Steel wool might work at audio, I have not tested it.

Also notice that permeability (inductance) starts to fall at 1 MHz, and  µ's drops off the graph at 30 MHz.

This is largely due to the insulated iron particles in the core becoming too large for the frequency. Circulating currents in iron granules become electrically large enough to support significant eddy currents,  increasing loss and decreasing inductance.

The steel wool balun is a good example of not understanding behavior of irons and magnetic fields at radio frequencies. The steel wool balun actually made it into the ARRL Handbook, which is one of the most reviewed amateur radio technical publications.

Even at first glance, the steel wool balun made no sense to me. Recently the steel wool, brillo pad, or SOS pad balun appeared in an Internet forum. Additionally, a Ham operator from Australia published an article claiming a steel bolt makes a good balun. To settle this controversy (this really should never have been a controversy, because the idea is pretty silly) I decided to measure a steel wool balun and see how well it works. Since I'm fortunate enough to have a laboratory grade impedance test set in my workshop, I thought I would put the debate to rest with actual measurements of common mode impedance. The HP4191A can easily and accurately measure Z, R, X and many other parameters from 1 to 1000 MHz.

I calibrated the HP4191A from 1-30MHz with standard loads at the end of a test cable. This normalizes the instrument to the end of the cable. Anything attached to the end is read as if right at the impedance detector! 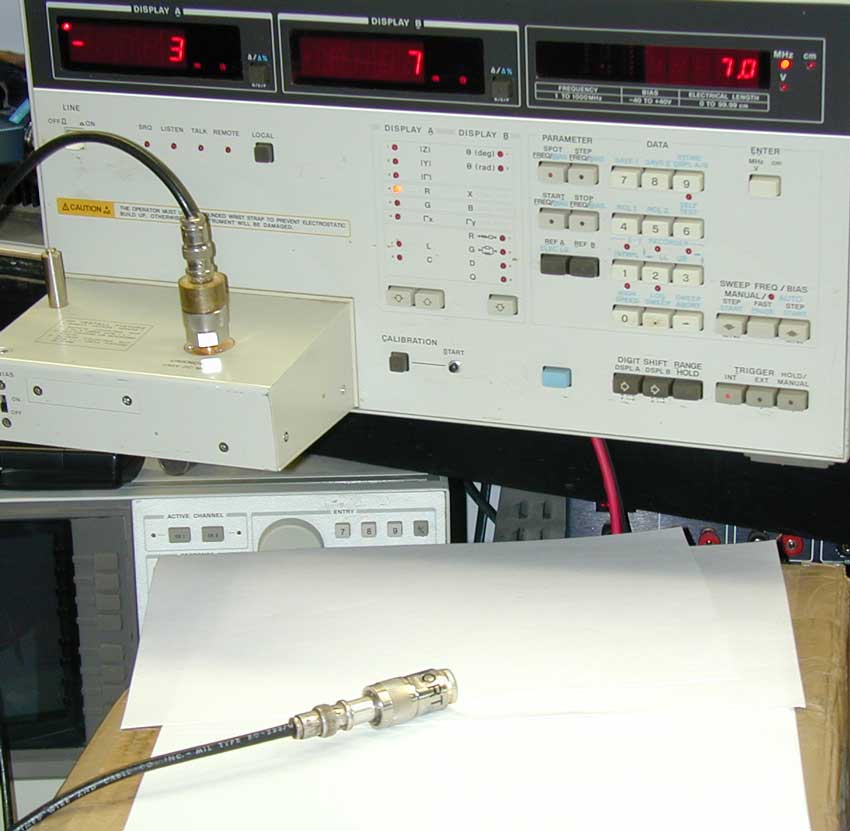 The above photo shows the reading with a short. It reads -3 milliohms and 7 milliohms reactance. -.003 R and .007 X is very close to a perfect dead short. We know the instrument is good at zero ohms.

Next we measure an open to confirm the high impedance end is calibrated. 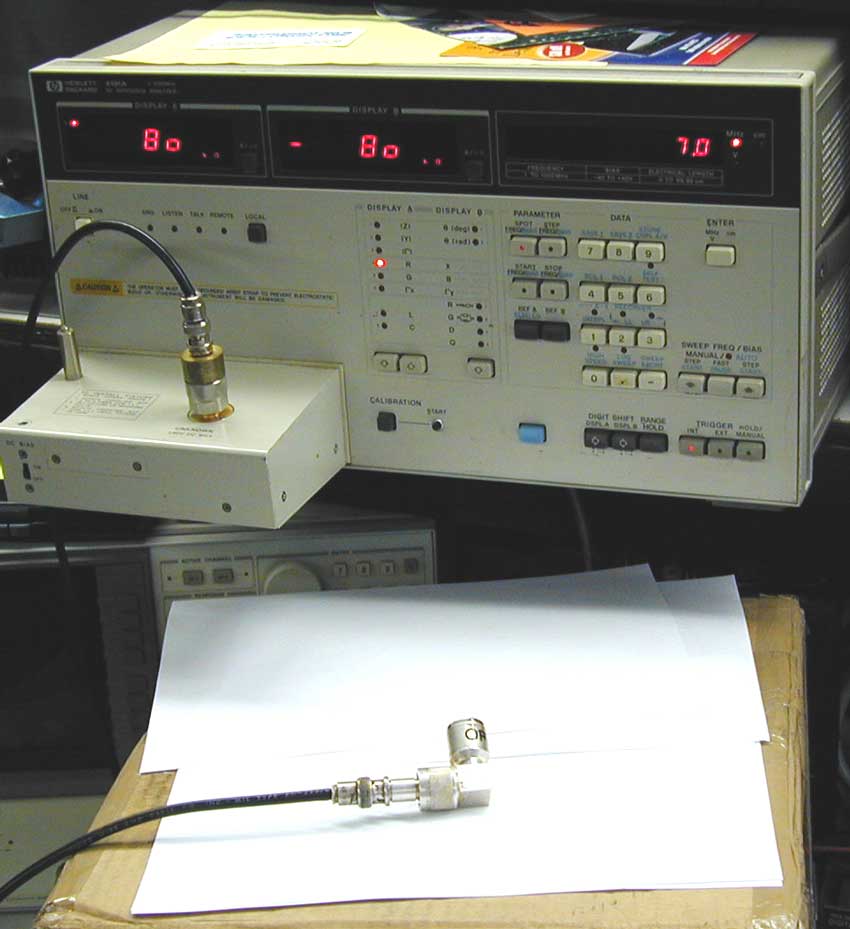 As seen above, the open measures 80k ohms resistance and -80k ohms reactance, or above 130K ohms impedance.  This is plenty good enough for this measurement so there is no need for recalibration. 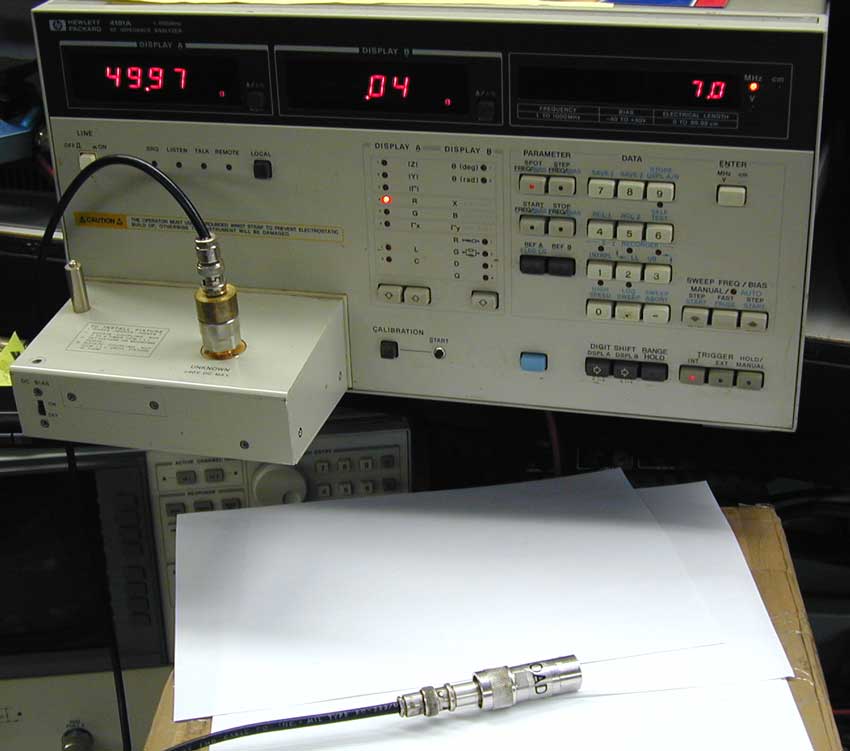 It reads 49.97 ohms with .04 ohms of inductive reactance. This is an impedance of almost exactly 50 ohms. Once again, calibration is good enough for this measurement.

The objective of installing a balun is to reduce feed line shield common mode current.  A balun should cause the cable shield to have the highest possible impedance for any unwanted RF flowing on the shield's outside. We can measure that impedance quite easily with this test setup. 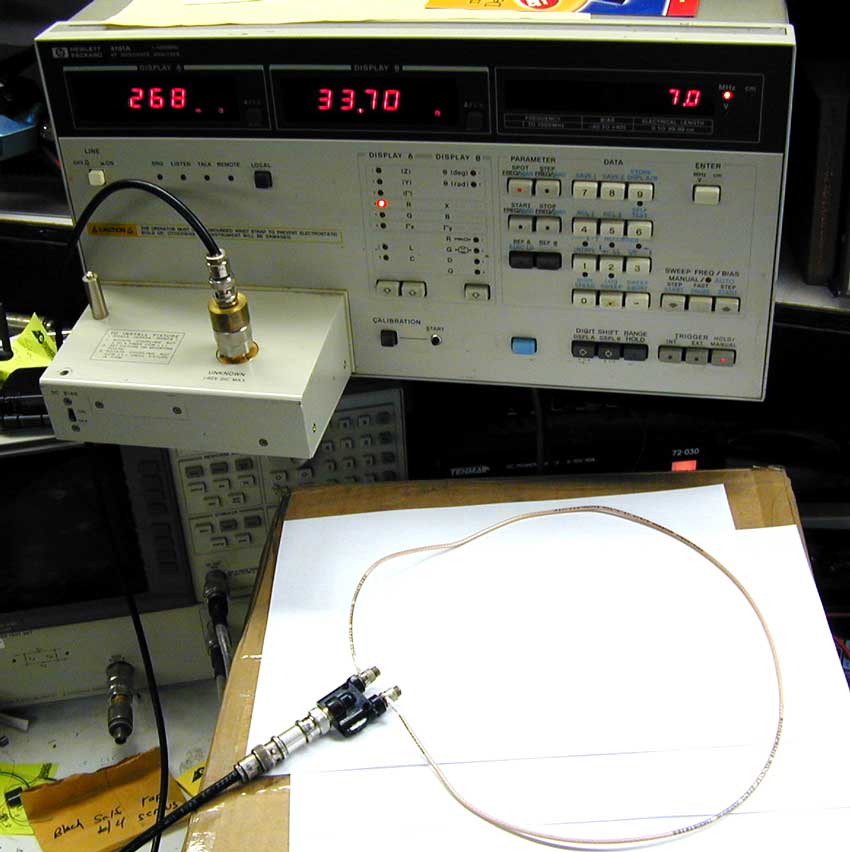 Notice the R X light is lit. A one foot loop of RG178 coax shield has a common mode impedance of .268 ohms resistance and 33.7 ohms reactance on 7MHz. This is an impedance of 37.8 ohms.

Next we wrap a super fine steel wool over the cable shield. This will show us how the impedance changes. 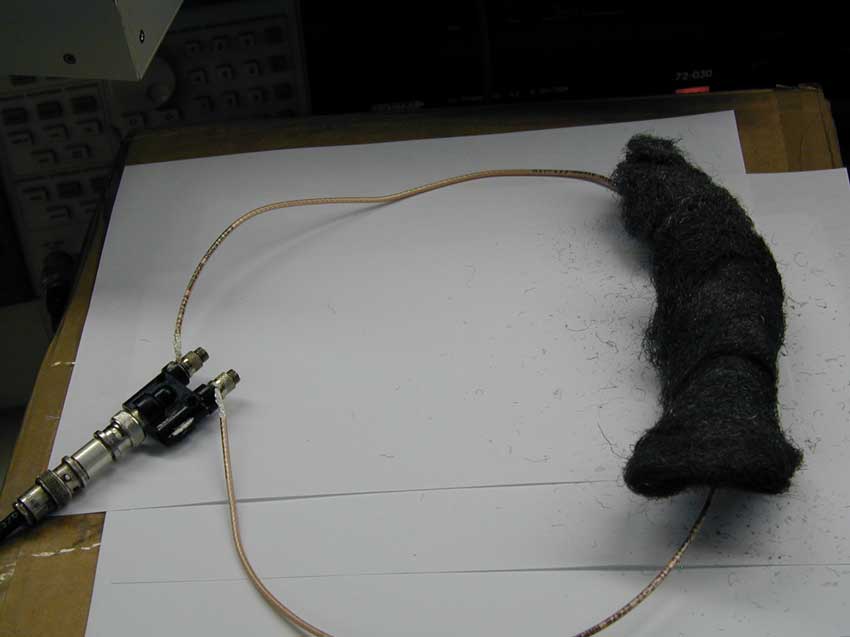 Steel wool is a mess around electronic equipment, but let's see if it works. 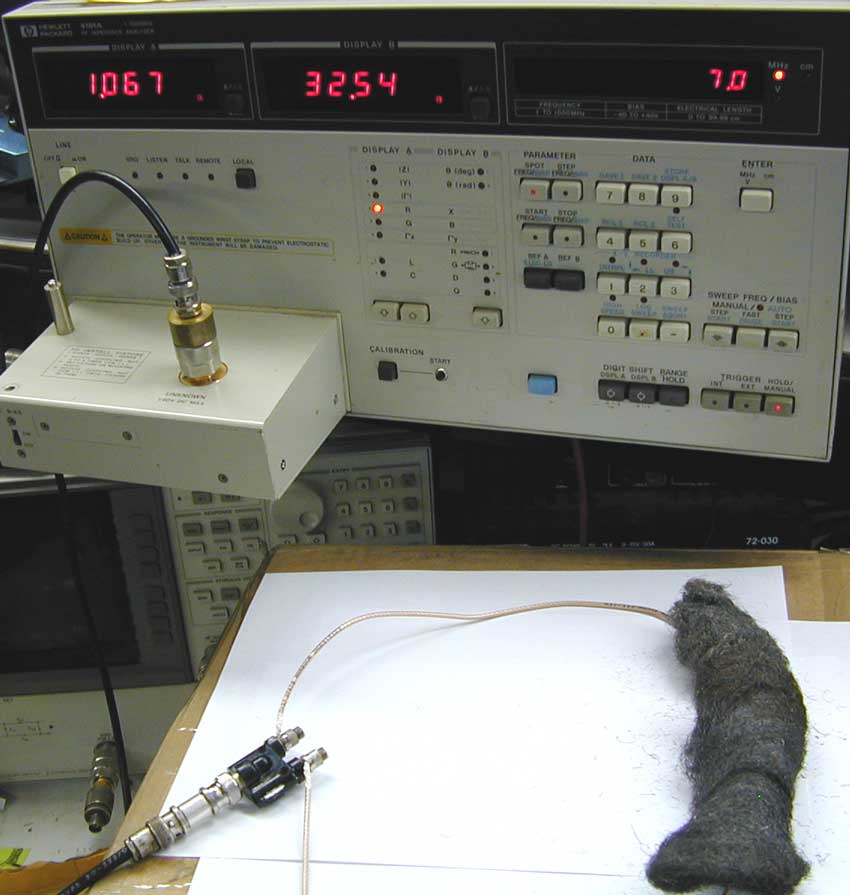 R has now increased from .268 to 1.067 ohms. X has decreased from 33.70 to 32.54 ohms. Despite being steel, the wool has actually lowered the inductance. This is because of Lentz's law. The magnetic field from the cable shield caused a circulating current in the steel wool. The magnetic flux from that circulating current opposes the magnetic field from the cable, reducing inductance. This is why at radio frequencies we use powdered iron or other cores that suspend very tiny particles of iron in an insulating substrate.  This is also why transformer and choke cores are laminated, and the laminations are all insulated from each other. If metal touches metal, the eddy currents will cancel the magnetic properties at higher frequencies. The higher the frequency, the smaller the pieces of metal must be. 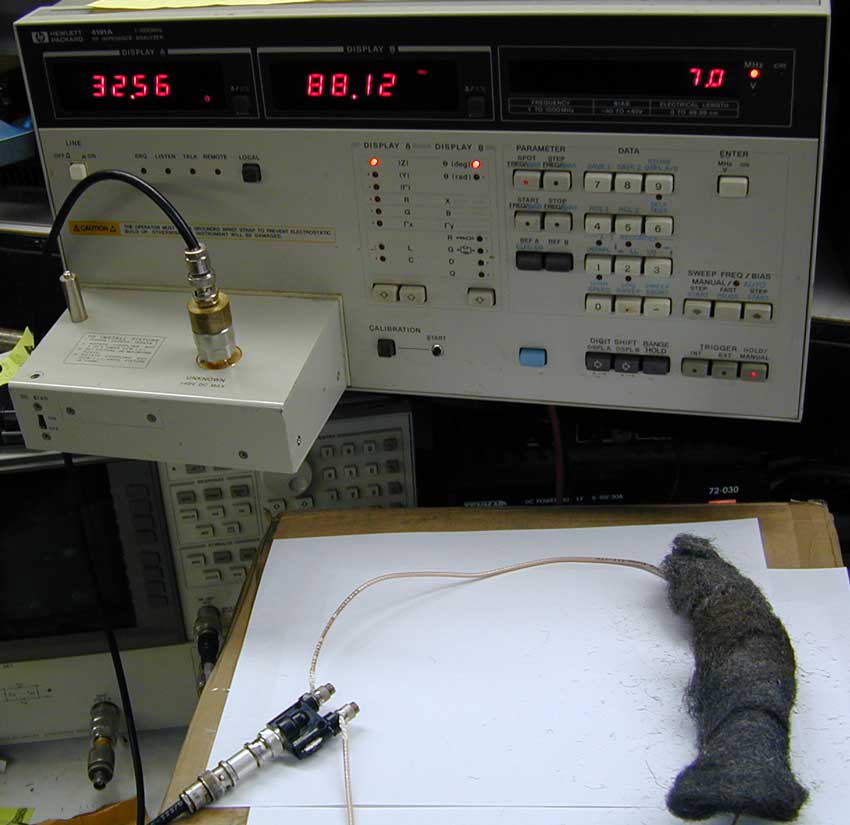 The impedance of the steel wool balun is 32.56 ohms (at 88.12 degrees phase angle). This is a DECREASE in common mode impedance from 37.8 ohms down to 32.56 ohms. In a balun or shield decoupling application the unwanted common mode current would likely increase! This is exactly the opposite effect from what we want. We have done a very bad thing by ignoring basic rules of physics.

Let's compare some real ferrite materials that are much smaller than the steel wool balun. 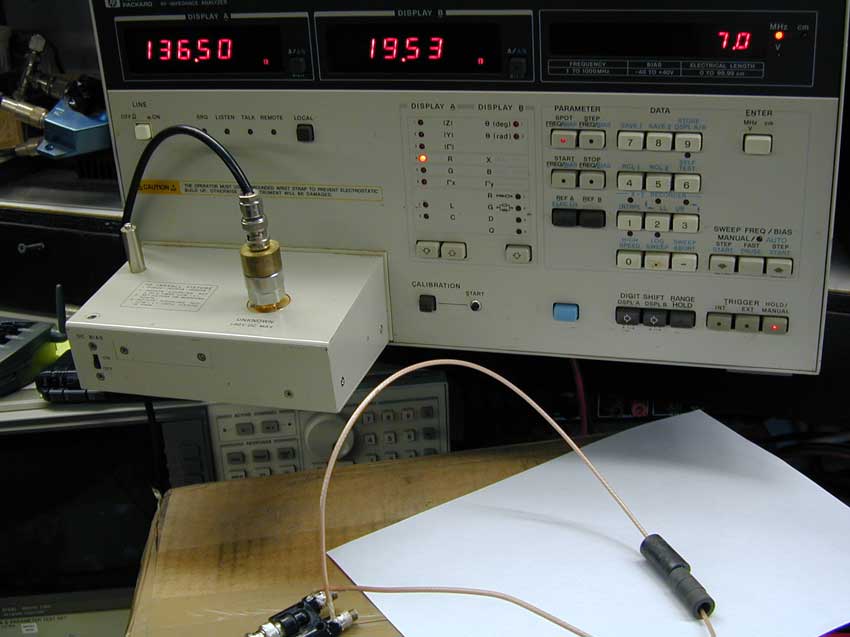 Two inches of #73 beads has a resistance of 136.5 ohms, and a reactance of 19.53 ohms. It is a dissipative resistance in series with a small inductive reactance. This is very good for RF suppression. 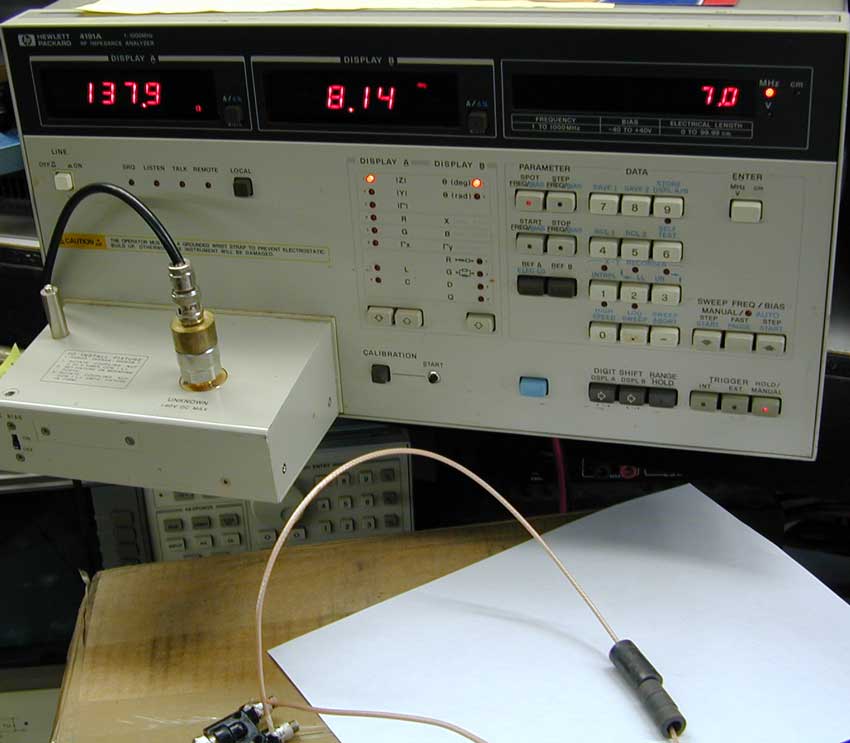 The impedance of the 73 beads is 137.9 ohms. In comparison the bare shield's impedance was 37.8 ohms, the steel wool was 32.56 ohms impedance. Steel wool was the poorest of the three systems tested, worse than using nothing on the shield! The effect is opposite the desired and claimed effect. 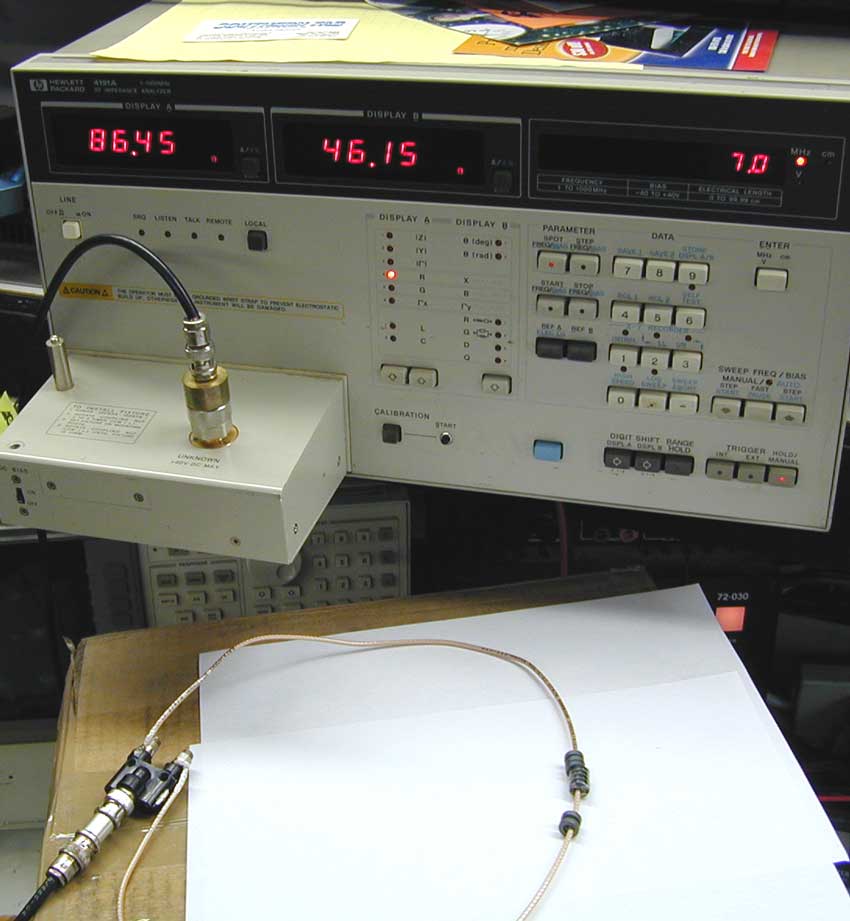 A different mix of a few less beads produced 86.45 ohms resistance and 46.15 ohms inductive reactance, over 100 ohms impedance. This was 10 beads of number 59 material.

It's human nature. We like simple fast cheap solutions to everything. We also don't always know how to measure things and in many cases can't measure things. The human emotional side is what allows believing in something even when the science is meaningless or totally wrong. This is how all those rumors and folklore like the shielded magnetic loops or parasitics damaging amplifiers  get started and why they are difficult to correct. It isn't that anyone has a bad intention, they generally just don't measure what they think they are measuring, or they simply misinterpret the cause behind an effect they actually do observe.

Let's stop this myth about steel wool and steel bolt baluns. Audio core materials are laminated or powdered for good reason. RF cores are small insulated particles packed together for a reason. A solid material does not behave like a smaller cross section material.