As with any old gear and our modern Internet, there are many needless (and sometimes detrimental) mods published for the Kenwood TL922 and TL922A amplifier.

I don't believe any of this is malicious or intentional, it is just a byproduct of bad information, experimental guesswork, and a desire for one simple answer to a variety of causes and cures. Well intentioned Hams think they have found a universal cure, even when the modification is detrimental to how the system works and contrary to good engineering practices, because a small sample of one or two units, often improperly tested, appears to function OK.

The following event sequence is often used to "proove" a mod works:

That's not much of a surprise if we think about it. When a bad component or components, in use for ten or twenty years or more before failure, are replaced..... quite naturally the system works again! Then, when the system works, the needless change immediately gets credit for improving things.

One single source has diligently worked to convince amateurs that nearly every arc, spark, pop, bang, component, or tube failure is a parasitic. This source, of course, is the only source for the "true" cure. Send him money, and every cause of past and future component failure is magically cured. Never mind that Eimac engineers, and virtually everyone else experienced in RF engineering or power grid tubes, finds fault with most everything he claims. Of course the natural defense is there is an "industry wide conspiracy" to discredit him, and to sell customers bad systems. Everyone likes a good conspiracy theory, the Discovery Channel and other networks capture the imaginations of viewers by presenting "evidence" of ancient aliens, big foot, and an occasional appearance of Elvis. If a larger cross section of viewers were amateurs, no doubt they would have an "Ancient Parasitic" show, tying Egyptians and pyramids to optimum shapes of nichrome parasitic suppressors.

A radio friend spent a great deal of money and time having his Kenwood TL922 amp modified. Despite a great deal of work, his amplifier never worked correctly for any length of time. This amplifier had the full treatment, including nichrome hairpins, but they had to be removed because of "parasitics" or instability. I have no idea if the amp was initially stable or not, but my best guess is his amplifier originally never had a parasitic. Most likely, as with nearly all other amplifiers, it simply had some bad 30-year-old parts. The only arc I witnessed in this TL-922 linear was from a bandswitch wire routed too close to another wire.

This amplifier arrived with well-cooked RF Parts 3-500Z's. The tubes were about 2 years old, and were very low on emission despite all the filament voltage, nichrome, and inrush modifications.

"Tom, After spending $500 for this amp 2 years ago and another $400 for repairs to getting it back on the air that’s $900 and now another $400 for all the mods done to it that places it at $1300." This TL-922 Kenwood was a victim of very strange, but expensive, pathological science and engineering.

While parasitics certainly can occur, they are grossly exaggerated in an effort to sell magical suppression kits. Stability can be tested and confirmed by following procedures at this link TESTING STABILITY.  There is no reason to guess! 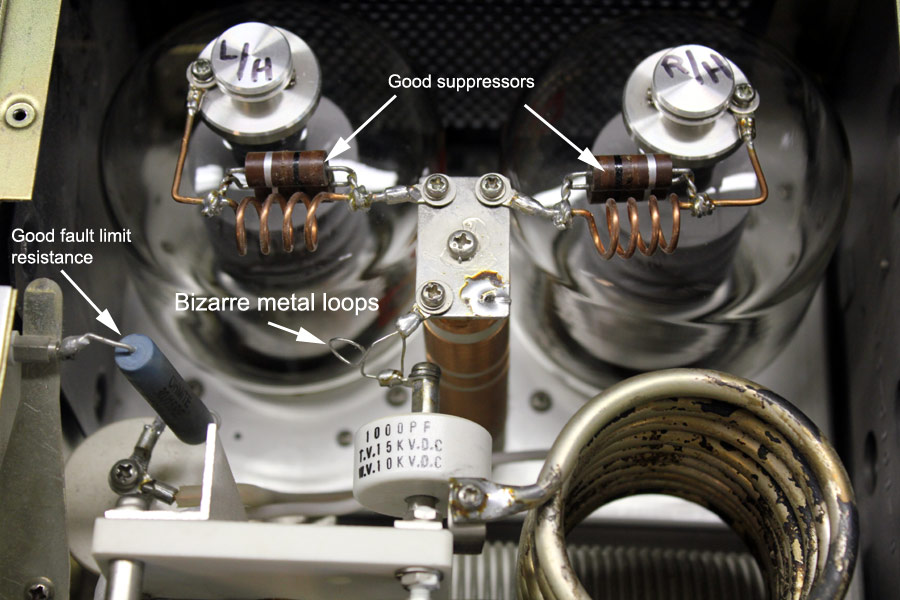 As received, this amplifier had reasonable looking suppressors, with the exception of suppressor lead lengths being too long. At least it did not arrive with the hairpin suppressors installed!

There is no reason to be "neat" in a tank circuit or RF system, and angle wires at 90 degree bends. Squared corners and right angle wiring, unless carefully planned, is almost always detrimental to circuit performance. If you read the linked page on VHF parasitic stability, you will understand why anode-to-chassis and anode-to-grid paths must be short.

The parasitic suppressor, to be most effective, must have significant impedance compared to the path from anode (inside the tube) to the chassis and back to the grid (RF signal common ground point).

When we use long thin circuitous wiring in the anode system, we make a parasitic suppressor of a given VHF loss resistance much less effective.

This TL922 amplifier had a some good rupgrades, but also had some bad changes. 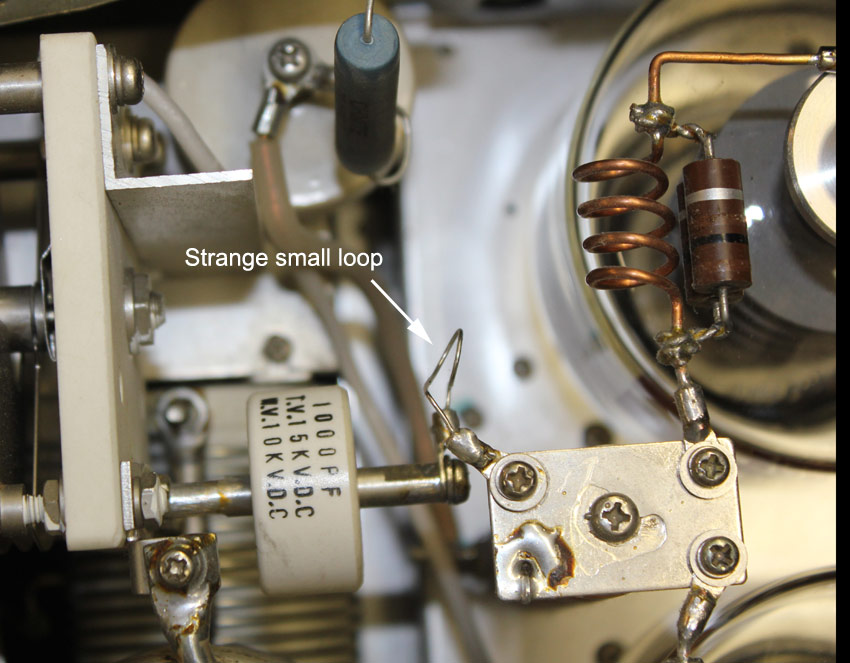 The 15 ohm HV fault limiting resistor at the middle-top is a good thing, even if not the best style resistor. A better style would be a 175P pulse rated resistor.

The anode path was a problem, though. Not only was path length needlessly long from the modifications, a small resistance element was added.

This was truly bizarre, RF-wise, because fairly high HF circulating currents flow though this path on upper HF.  It reduces upper HF tank unloaded Q (that should be high for maximum efficiency), while reducing effectiveness of the anode-to-plate choke VHF suppressors.

Not only that, it was a short straight wire shunting a tiny loop. There isn't any logical RF rational for an odd wiring system like that. 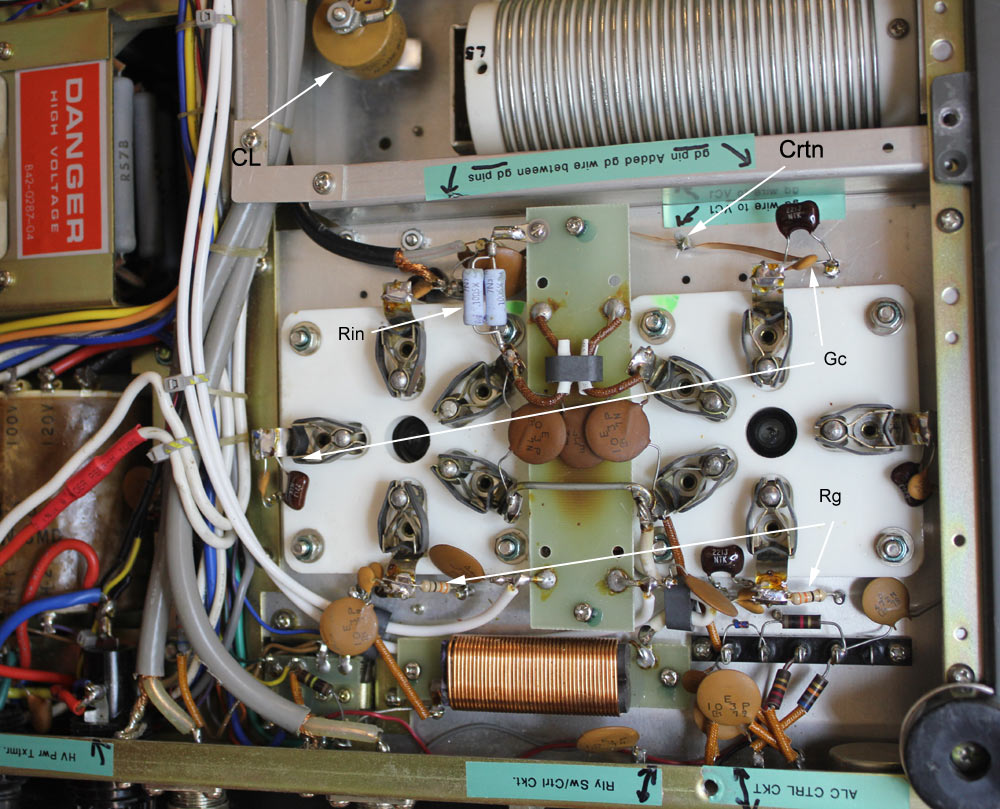 The TL922 had the wrong type of capacitors at CL. These caps need to be temperature-stable high-current capacitors.

The grids had different capacitor values Gc with long leads added, along with very small resistors Rg. These parts serve no benefit at all, and only cause problems.

The strangest thing of all was a copper strip Crtn connected between tube grid pins that went up to the rotor of the plate tuning capacitor. This wire has no useful function at HF or VHF! At HF and lower, the shunting impedance of the plate capacitor and the grid bypasses pretty much remove all current through the long thing white wire, and at VHF the thin wire's length adds significant series impedance, while the shunting impedances at each end bypass currents.

I don't know if this was from Kenwood, or if someone else cooked it up as a modification, but the long thin wire from plate tuning capacitor to grid pins serves no useful purpose.

I de-wormed the TL922 by pulling this very odd hunk of wire out. Whoever thought installing it was a good idea probably did not think through the system or measure anything.

My guess is someone thought it would ground the plate variable back to the grids for stability.

Into the trash it went! 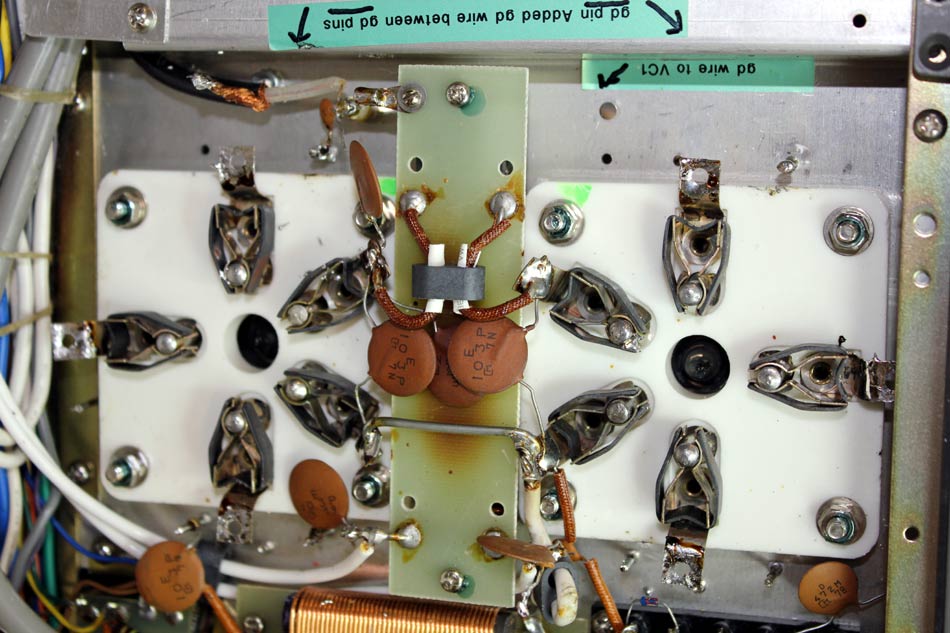 I removed all the unnecessary parts from the grid and filament pins. 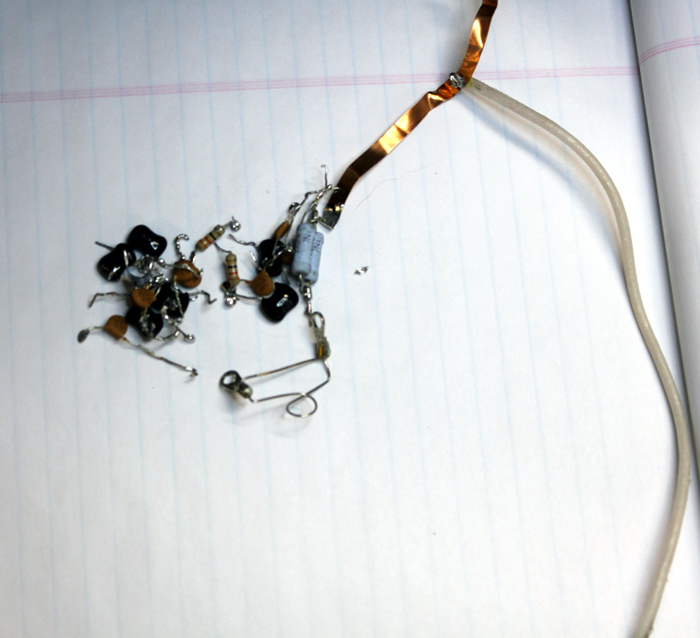 This is the pile of useless bottom parts, plus a thin magical parallel wire nichrome combo from the tank system. 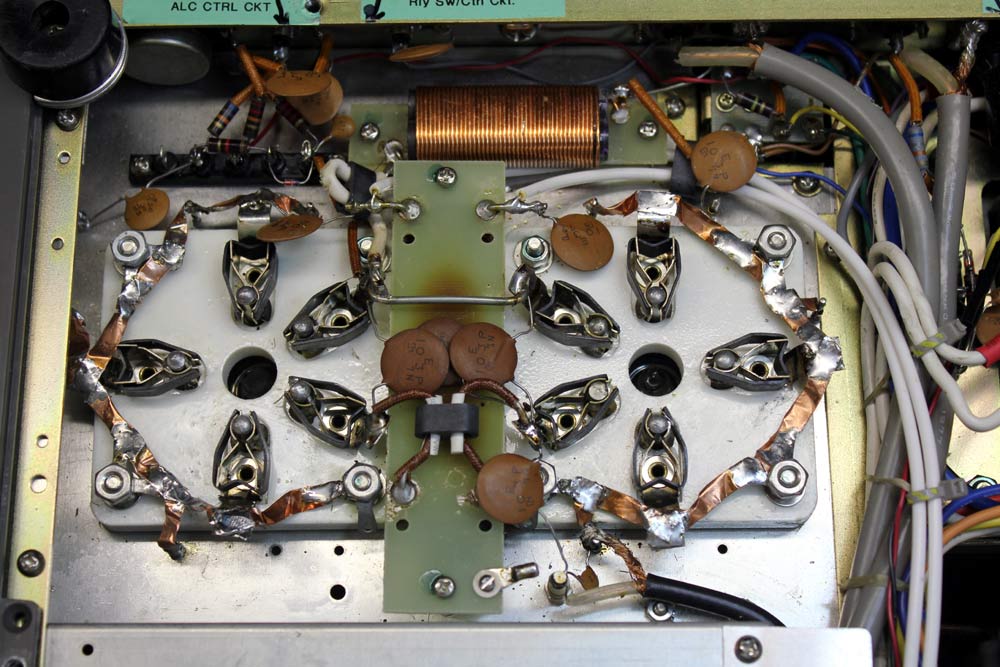 Grounded grid amplifiers, for a number of reasons including driver radio safety, stability, and purity of emissions, should have the grid grounded. See these links:

No good ever comes from floating grids when they can be grounded, and I stopped this practice in all amplifiers. I  even removed it where I used it in the past!

One Internet mod says to ground only one TL922 amplifier grid pin.  Do not follow that advice! 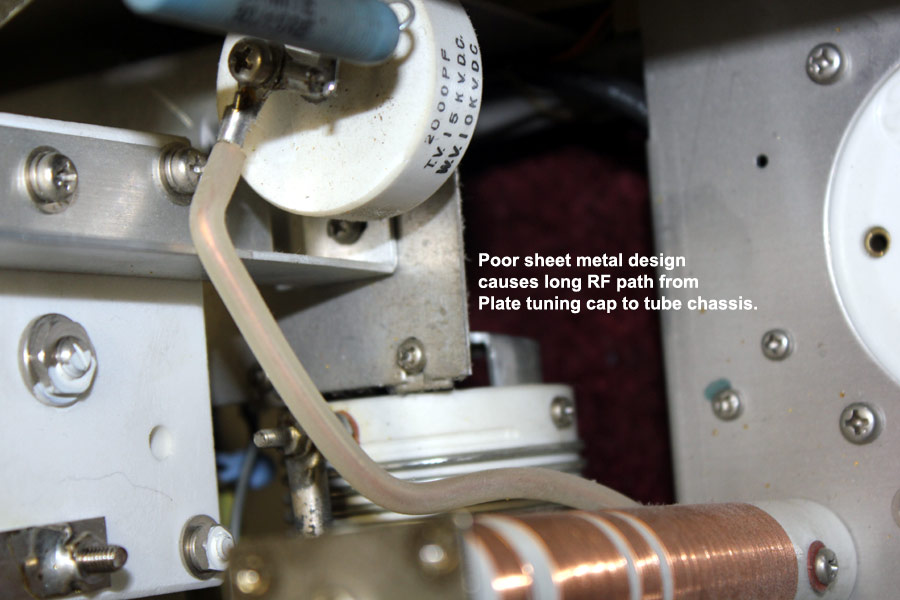 I'm sure this is a Kenwood TL922 design factory design flaw. The air variable not only has a single very long ground connection path, there is a very long path from that chassis section to the tube chassis. If a single screw in the right place comes loose, the Plate capacitor will not be grounded! 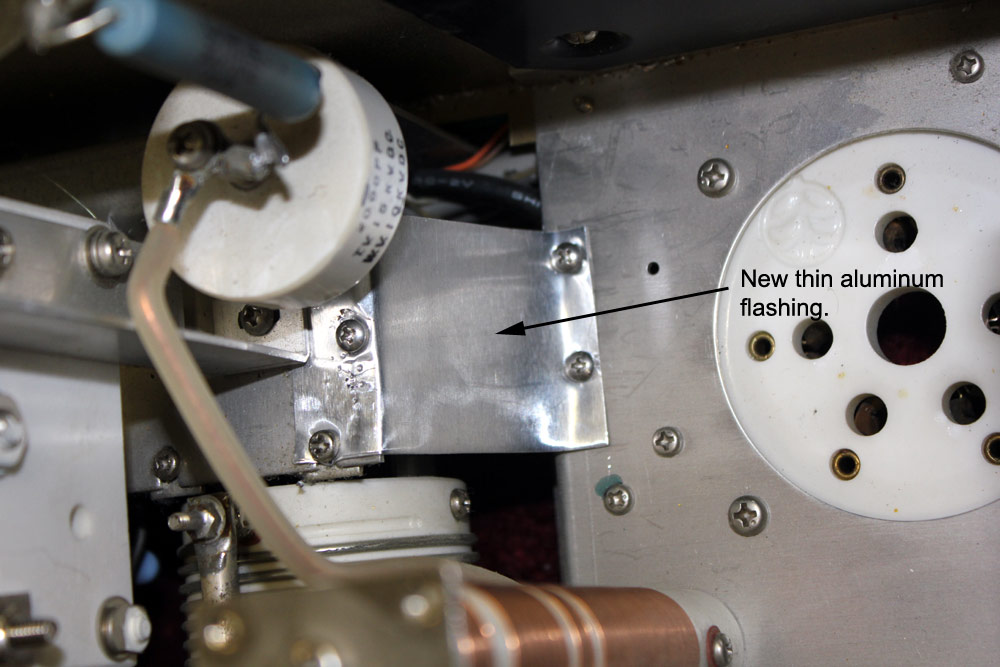 I added a direct connection between the tube chassis and the ground point for the Plate Tune variable. 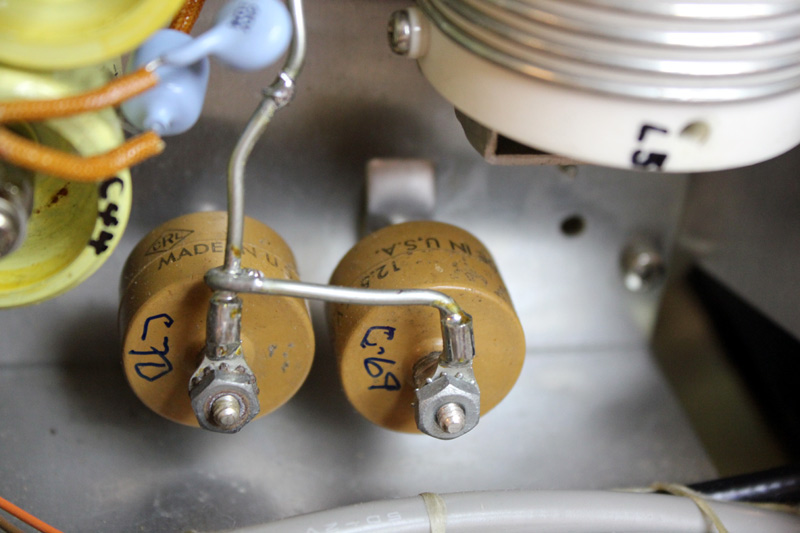 This type of capacitor is unsuited for high RF currents, and is unstable with temperature changes. 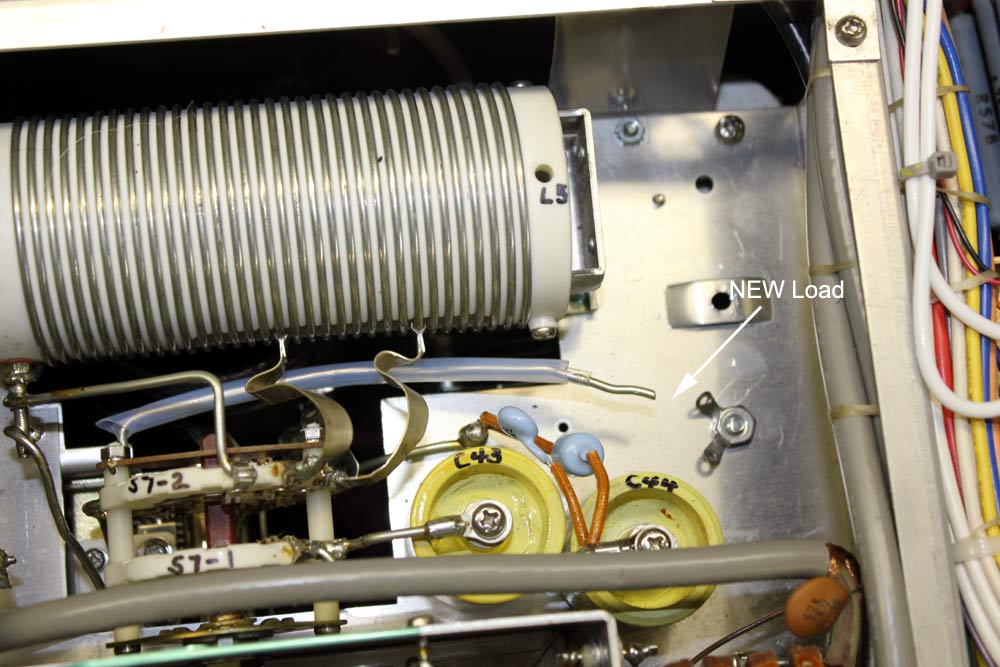 Prepare by insulating and spacing the 160 padding capacitor lead, and adding a ground lug if you use leaded parts.

The original parts were probably good, but the person who upgraded this amp used small disc caps that burned up from RF current.

The owner then found larger caps, but they were poor RF capacitors. 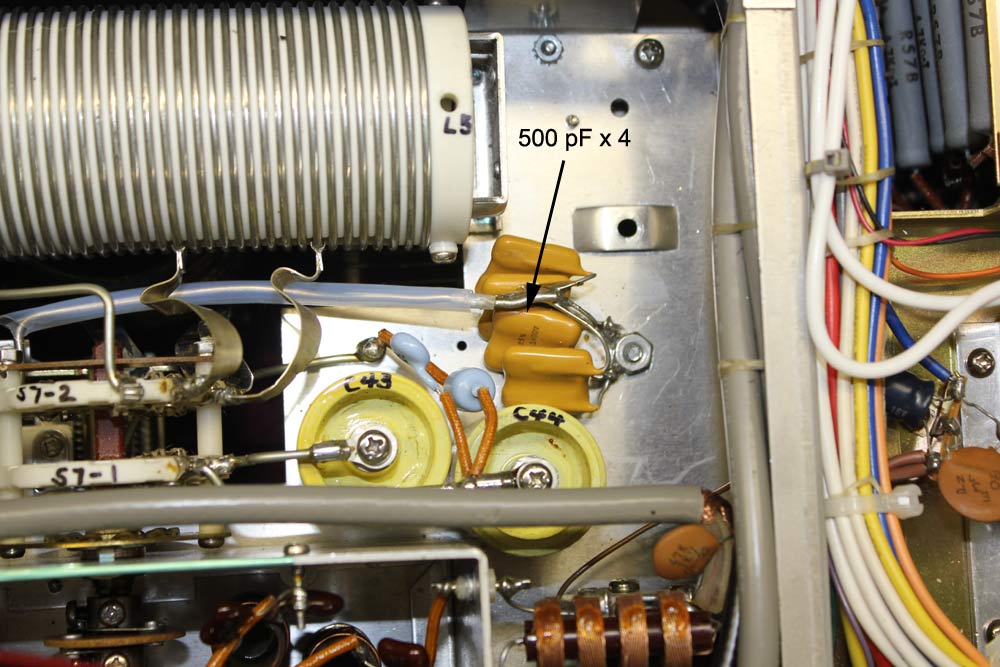 I settled on 1000 pF total with fresh tubes. 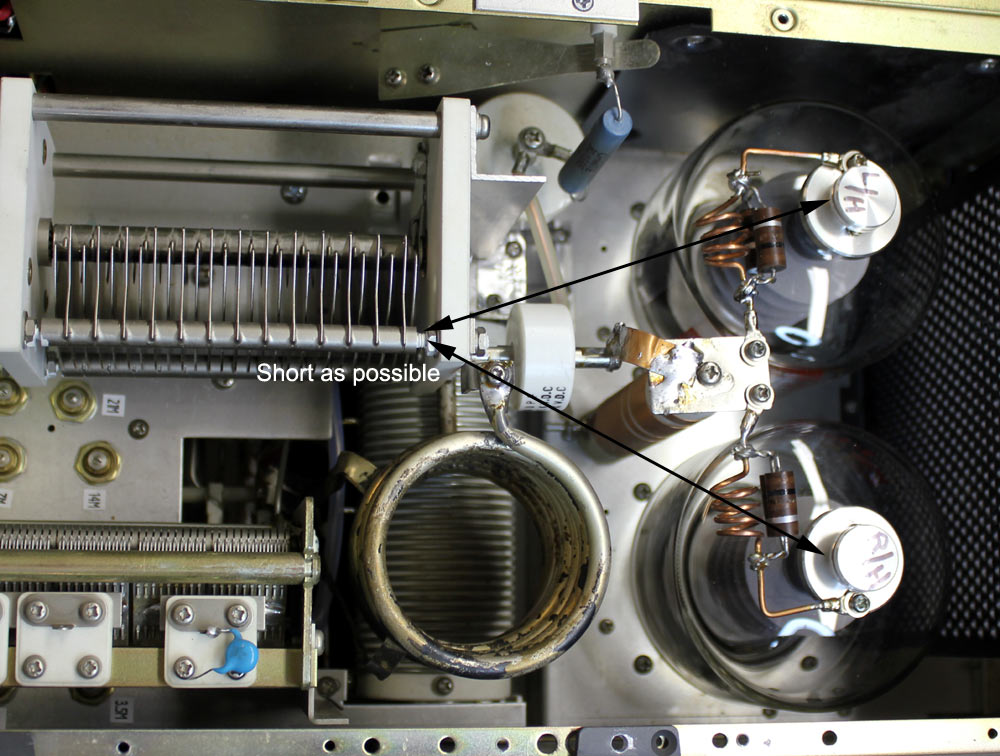 The path from anode to tank capacitor (and eventually to ground and back to the grid) to ground should always be as short as possible.

Other than the suppressor coil itself, we always want this path to be the lowest possible impedance at VHF. This not only improves stability, it also improves efficiency and harmonic suppression. 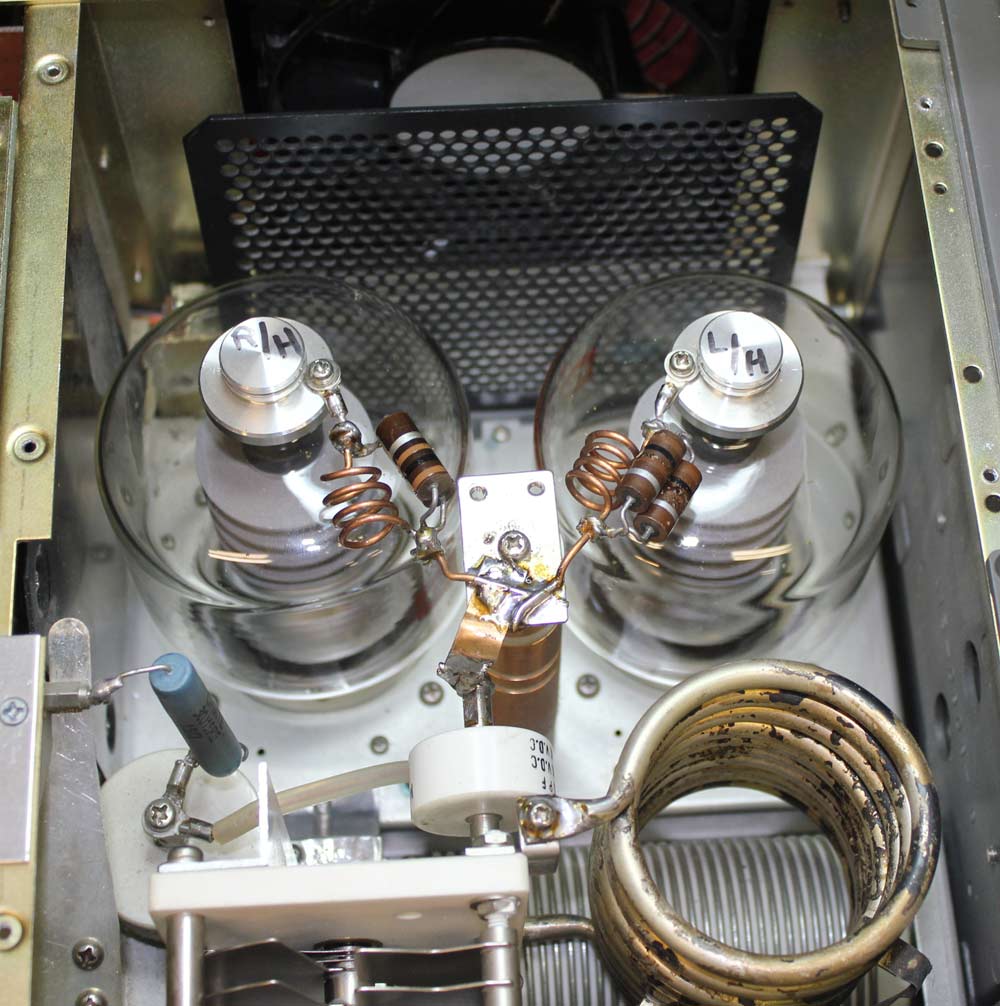 While not the neatest looking suppressor in the world, the suppressors installed functioned perfectly.

I removed considerable lead length from the suppressor system.

I silver soldered to the existing bracket.

The only thing I really didn't like about the suppressor was the resistor attachment method and the type of wire. It was a very hard bare copper.

The strap silver soldered to the doorknob blocking capacitor is soft copper strip.

This amp had a step start system using a relay and 20 ohm resistor. It does not make much difference at all in filament inrush. I measured inrush both with and without, and other than a dt<0.1 second delay before the filament current peak, everything was the same. It will probably help power switch life, but doesn't do anything for actual inrush. 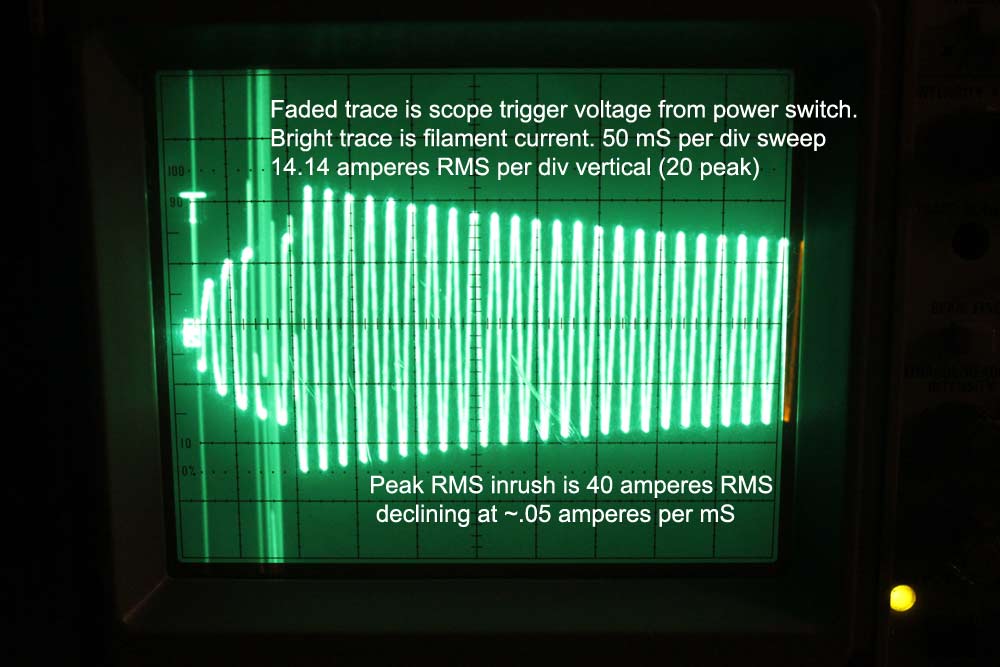 The tall traces are from switch and relay contact sparking. The spikes get in through the trigger circuit, and are actually not present on the filament line.

The peak RMS filament current measured 43 amperes without the step start, and 40 amperes with the step-start system. The delay time is so short it is hardly worthwhile for anything except extending power switch life.

This amplifier had LED's in the meter lights. There was a small circuit board added to power a step-start and new meter LED's.

This new dc supply board was sourced from the 8 VAC line feeding the old incandescent meter lamps (very bottom 8 winding).

I was told the LED's had short life. This was because a small DC half-wave supply with only 220 µF of capacitance was used to power the LED's. This made a great deal of AC ripple, and to obtain good brightness 100 ohm resistors were used. This made peak current around 65 mA, with an average current of 40 mA. This slowly damaged the LED's.

The replacement LED's were www.superbrightleds.com 5mm White LED p/n RL5-W15120 They have an average current rating of 30 mA.

I replaced the original 220 µF with a 2200 µF. I put the LED's in series at each meter, and used a 220 ohm 1/2 watt resistor on each supply line. This made measured LED current 23 mA of nearly pure dc. Be sure you check LED current with a DVM in series with the LED's. Adjust the current for less than rated LED current!!   In this amplifier, 220 ohms worked fine with two LED's in series. 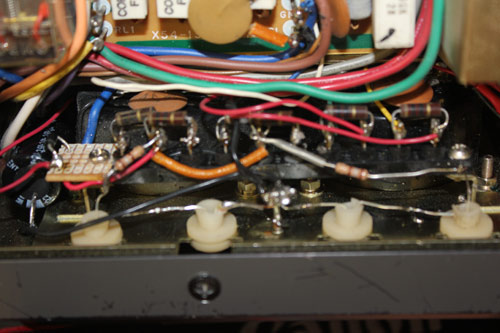 I added a negative rail clamping diode for meter and zener protection. I put a 1N5408 in parallel with a .1 µF 50 volt capacitor across C65. 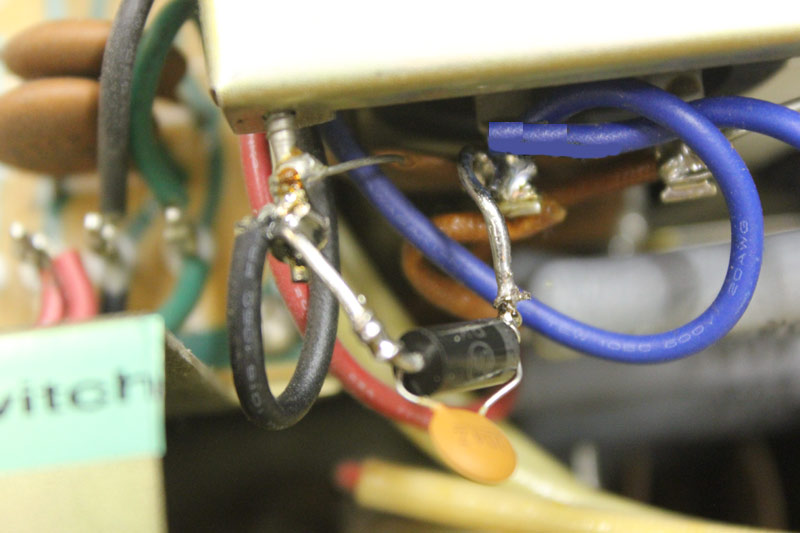 The negative supply rail clamp that protects the TL922 meters and other parts connects across C65, from the bottom filter C15 capacitor negative terminal to the chassis ground pin.

An explanation of why this works is at this link.

RL-2-1also needs changed. Remove the wire from the normally closed contact. This mod was already done in this amplifier. (The NC terminal of RL-2-1 was empty as it arrived, so I did not have to make the change.) Removing the connection to the NC terminal of RL-2-1 prevents damage to transformer T2's  80-volt winding if a tube shorts from grid-to-filament. 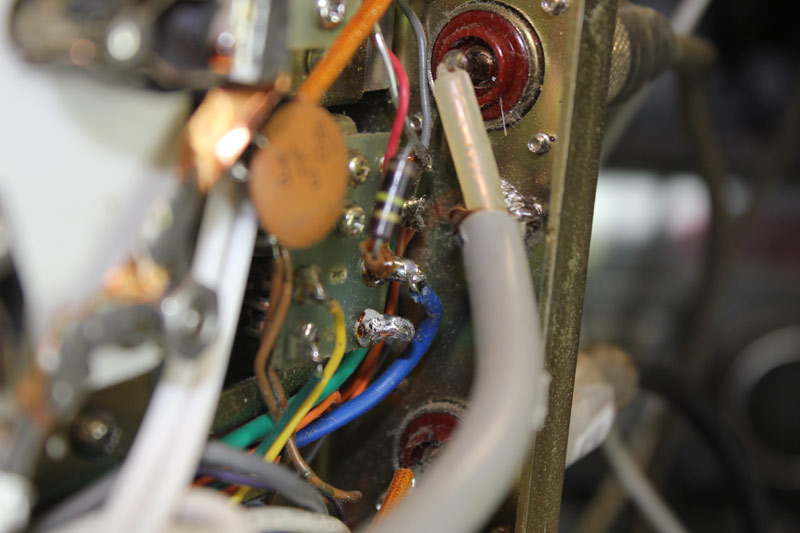