The purpose of this page is to extend our insight into how torque converters work, or what they do.

Torque converter "stall" or "slip"is based on the applied torque and the differential RPM between the transmission input shaft and the engine.

Let's consider the zero MPH starting line point. This is the most simple point to talk about. Gearing, weight, and speed are not a factor.

Even if we know the shaft speed is zero, rendering weight, gearing and speed meaningless, we still have to know the torque vs. RPM curve. Torque vs. RPM is also the same as knowing horsepower and RPM. This is because horsepower, RPM, and torque are all interlocked by the formula that tells us horsepower is (RPM*Torque)/ 5252. If we know any two of the three that include horsepower, torque, or RPM, we absolutely know the third.

If we do not know torque stall is specified at or observed at, as well as the torque curve of our working engine, we cannot possibly know the expected locked stall.

Let's look at an example.

My car weighs 3200 lbs. If the tires had infinite traction and all movement was forward acceleration would be 7168/3200 = 2.24G's. Most tracks will never take that shock, so I have to leave much lower boost (and RPM) and "ramp" into more torque. On a good track my car will peak around 2.5g in low gear just after the suspension sets up. This results in a 1.15 or so 60 foot time, and a ring gear life of about 150-200 passes.

This same converter drops to 6800 on the shift at 28 psi. 28 psi at 6800 is around 1150 ft/lbs or 1489 HP. This is where things get complicated. This drop not only depends on engine torque, it is also dependent on transmission input shaft speed on the shift. The rolling "stall", "flash", or "slip", whatever we want to call it, is ultimately dependent on engine characteristics that determine engine torque vs. RPM, car weight, gearing, tires, and speed.

This video shows tire smoke on the 1-2 shift, where tire forward thrust briefly exceeds traction limits from the torque surge.


This screenshot shows torque converter response through RPM, boost, and time data. TPS is throttle position. Look at how RPM follows boost, and engine torque would also follow boost. The crosshair position is where the car starts to roll out. Beyond that point transmission input shaft speed is also a factor in RPM. 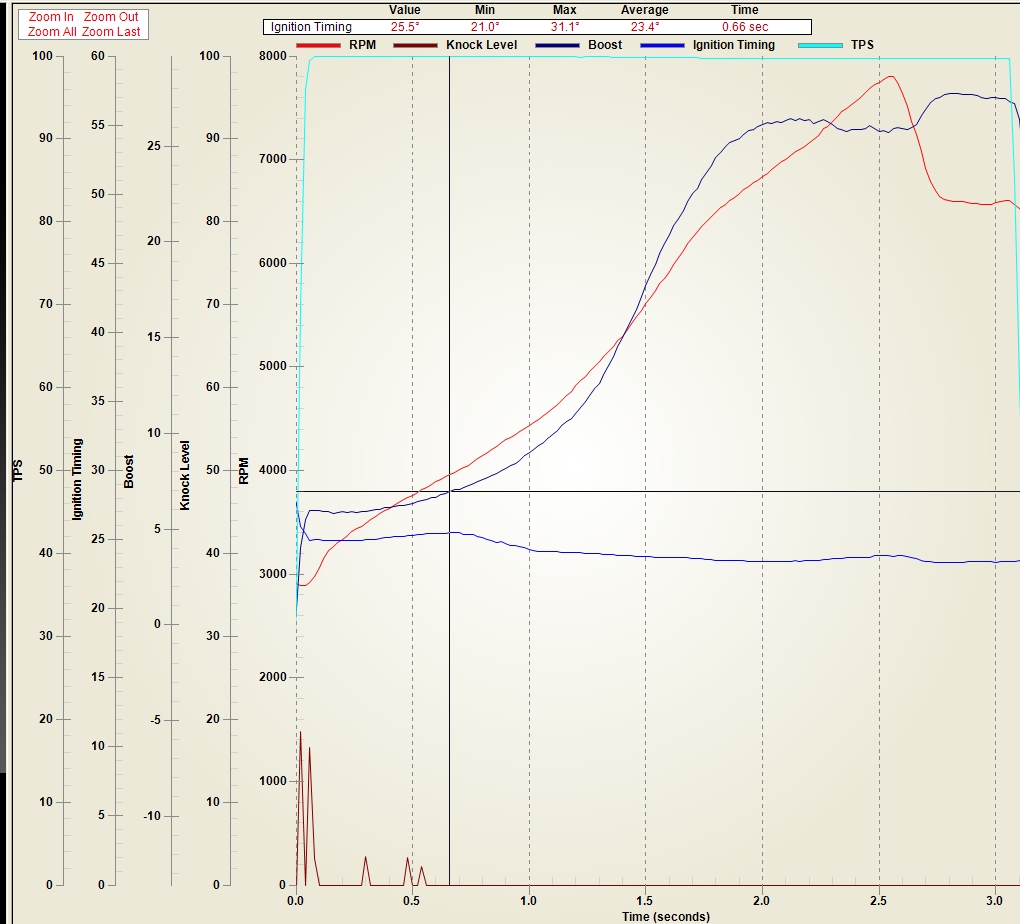 There are several web based papers on torque converters.

It contains this graph of efficiency, multiplication, and RPM:

I translated that with formulas derived from the following pdf file:

This is the resulting match between formulas I used and the student graph: 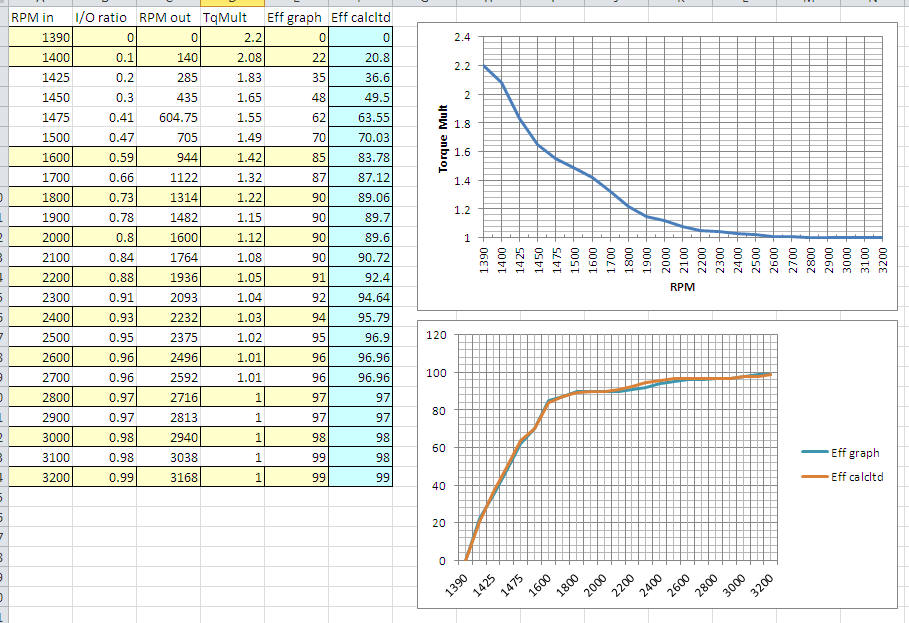 This is how efficiency overlays with data from a 5000-stall 8-inch race converter. I normalized the converter data to the RPM range of the lower stall converter: 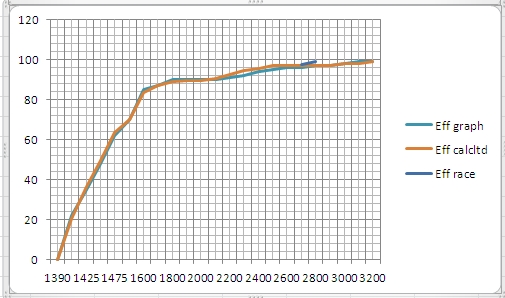 It's a Fluid Drive Clutch!

The "slipping clutch" allows the engine to move around in RPM compared to the output RPM. This is why an automatic car can idle, instantly move to high RPM even while the transmission input shaft is not turning, or coast down with less engine RPM than a solid mechanical lock would produce. There is a maximum differential in RPM (speed) for a given amount of torque applied to the input, at a certain output shaft RPM range. This differential is commonly called the "stall speed", because the engine "stalls" or is held at a certain RPM with a certain peak torque. The actual "stall", however, varies all over the place with applied torque and output (transmission) shaft speed. This is why a high stall converter, at very light throttle, generally works perfectly fine on the street. On level ground and at modest speeds, applied torque is so low the car often does not even behave like it has a high stall converter.

Look at this video of a glide with high stall on the street:

The variation in stall with load and output RPM is why different engines, gears, and weights cause the optimum converter stall to move around. This gives converter wizards a big recipe to sort through. The fluid slip is not much different than a slipping clutch, except at some speed differential the fluid starts to lock harder. It also heats fluid, and not an exposed steel surface or clutch disk, so the power dissipated by the "fluid slip" doesn't "stink" as bad. The equivalent "clutch", because it is fluid driven, eventually becomes nearly perfectly locked at a certain RPM. There is no torque multiplication in a clutch or in a direct fluid couple. All either can do is slip, and slipping will waste power by converting it to heat.

For a little brain exercise, try to think of a device you can build that increases pressure or torque without a lever, or without a gear working against another gear on a shaft or shafts. Like a teeter totter, there has to be a fulcrum involved and some form of leverage.

Torque is also a series function in a system. Torque is much like current in an electrical circuit. If a coupling device has one isolated path with nothing to divert torque, leverage against, or apply counter torque against, torque is the same at both input and outlet.  If we have anything between the engine and the transmission, it cannot change torque unless it has a third mechanical path to the transmission case or engine block. The torque out of the engine into the device will always equal the torque to the transmission, absent any additional path. 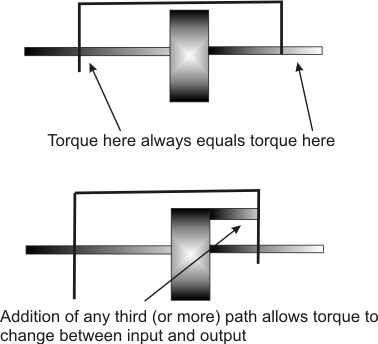 It's Also a Fluid Gear!

This effect is created by the addition of a stator and one-way clutch to a conventional 1:1 ratio fluid drive. The one-way clutch is anchored to the transmission, and becomes the necessary third path for leverage. The impeller spins, directing the fluid in a stream through a stator and into a turbine. The fluid is redirected out of the turbine, and eventually back into the impeller. This means the fluid has to pass through a stator at least once, which is only a true stator when locked.

The stator is locked by a one-way clutch system when the output shaft and input drive (the converter case) are operating at large rotational speed differential. The stator blade angle forces the fluid stream to be redirected at a sharp angle into the turbine blades. The fluid pressure also turns the stator in anti-rotation against the transmission case. This puts pressure against the transmission case opposite to the output rotation, just like a gear does on the shaft supporting the gear. This angular change and pressure against the transmission case produces much higher output pressure, but decreases velocity by the same ratio pressure increases. This system is the fluid driven analogy of a lever, a gear set, or any other mechanical speed-to-torque conversion. Like any lever or gear, the fluid redirection trades movement distance (rotational speed) for increased pressure (torque). Maximum gearing is at stall, where some large converters with narrow RPM ranges and/or multiple stages can have 5:1 torque multiplication. Most automotive converters are generally said to produce about 2:1 torque ratio, while some finely tuned converters claim 2.5:1 (or higher) torque multiplication.

Again, this torque multiplication is not much different than what would be expected using a mechanical gear set driven by a fluid clutch, with the exception it has a variable rate that is inverse to rotation rate differences at input and output. As converter output shaft RPM increases, the center stator unlocks and starts to rotate. This reduces the fluid's redirection, removing the countering pressure from the transmission case and reducing the redirection and pressure of fluid. This causes the turbine's velocity (speed) to increase while the turbine's pressure (torque) decreases. Thus we have a hydraulically-coupled version of variable gear ratio. 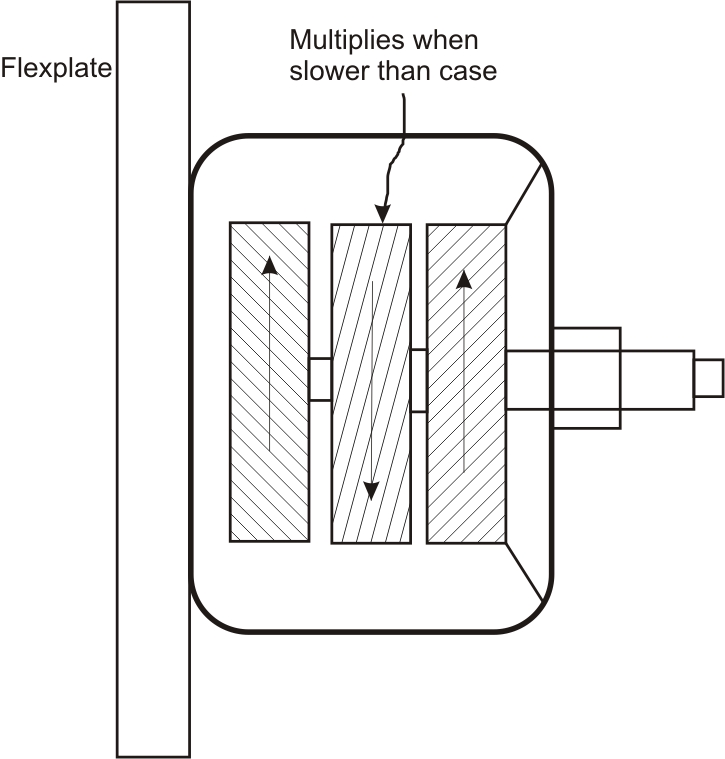 The efficiency relates to power loss, so we have to deal with horsepower. Horsepower is (RPM*torque) / 5252. This is a spread sheet using standard math, with data extracted from a typical converter design found on Internet. Here is an efficiency chart:

Looking at the spreadsheet, which is based off real converter data, we see as the stator eventually assumes the speed of the input drive, fluid redirection is minimal. When the stator, impeller, and turbine assume the same speed, the converter comes very close to a 1:1 ratio with no torque multiplication. There is only some small amount of fluid slippage, which causes a small RPM loss. This RPM loss represents a small horsepower loss. If it is 5% slippage, the system loses around 5% power as heat.

When that happens, the TC output speed moves to 4122 RPM. The load on the engine quickly causes the engine to readjust to the RPM required to hold the output at 4122 RPM. We now have the engine back just below 6000 RPM. Throughout high gear, the spreadsheet looks like this:

High gear starts as a 1.21 ratio gear set would behave, and moves to a 1:1 final drive. Our two-speed transmission behaves like it has the following ratios going down the track:

This is why automatics feel "smooth", but have fast ET's.